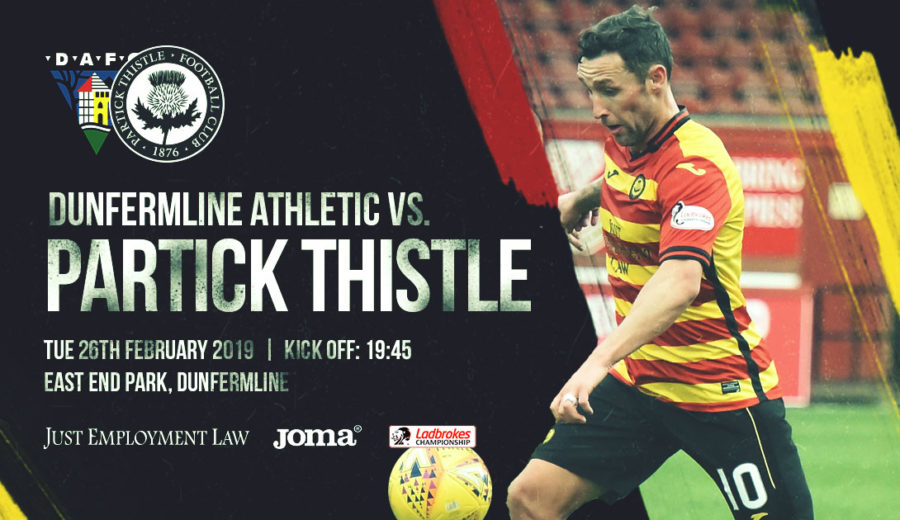 McDonald: We have to bounce back

Scott McDonald knows it’s important to bounce back from the second half disappointment against Ross County by taking all three points against Dunfermline.

The striker feels the trip to Dunfermline, only a few days after Thistle’s last Ladbrokes Championship fixture, is the perfect chance for the players to get back to the form they had shown beforehand in 2019.

Speaking to ptfc.co.uk he said: “It’s vital that we bounce back against Dunfermline after what happened in the second half on Saturday.

“It’s good to get a game so quickly, it lets you get it out of your head, it means it won’t linger on it all week. We have to focus straight away on the next important game.

“We have to look at the second half, look at the negatives and put them right against Dunfermline, we gave the ball away cheaply, we lost our shape and we have to make sure that doesn’t happen again. We have to look to do what we had been doing right recently, that is what was winning us matches”

McDonald knows the importance of bouncing straight back with a win and not undoing the work of the year so far.

“We have shown what happens when you put a string of good results together, it’s important now we don’t go the other way and let ourselves go on a bad run. We can’t feel sorry for ourselves, we have to use the second half as motivation to get right back at it and look to do what we done in the first half and in the games previously

“If we can get the win we bring everyone back into it again and it’s important we do that, we were looking ahead in the table and we have to look to be able to do that again with a win on Tuesday.

“Dunfermline have had two good results so it’s important that we try and close the gap on them and end the run that they are on while getting back to the form we had been in.”

The defeat against Ross County put Thistle back to the foot of the table, but a win would see The Jags rise to 8th again and Scott knows the importance of looking up again

“We got to the point we were at because of the games we had been winning, because we had been doing things right and we put things in our own hands, it’s important now that we don’t let what happened get to us and look to climb the table again.

“It was the first blip of the year and we have to make sure that is all it is and it will soon leave our mind as we look at the next game coming up.”

“East End Park is a tough place to go, Dunfermline are playing well at the moment. They will be full of confidence but we have to make sure we use our qualities and our good players to go out and take all three point.”

More exclusive preview interviews with Craig Slater and Jags manager, Gary Caldwell, are available to Jagzone subscribers – log in now to see them.

Can’t make it to East End Park? Jagzone members can listen to live audio commentary of the match. JagZoneLIVE begins at 7:30pm on Tuesday.