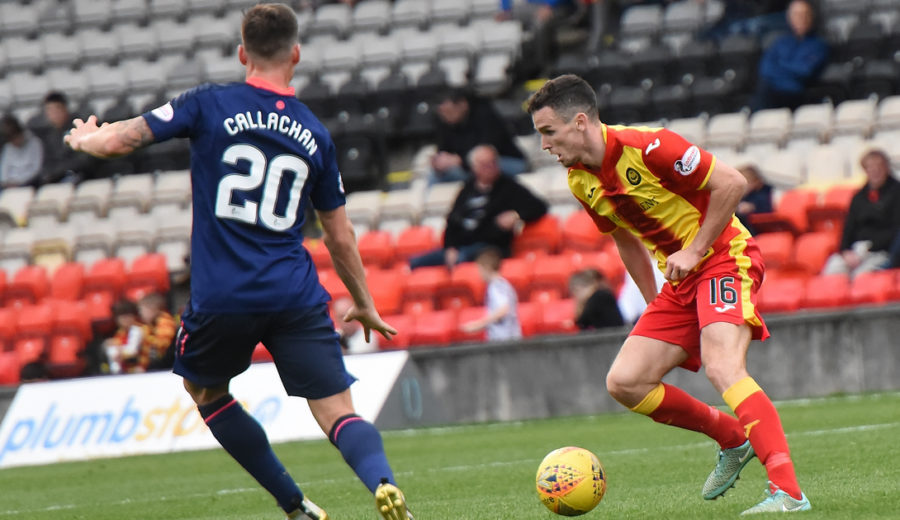 Paul McGinn feels it was two points dropped after Thistle let a lead slip to only draw 1-1 with Hearts at The Energy Check stadium at Firhill.

Despite Blair Spittal opening the scoring a late, controversial equaliser gave Hearts a share of the points despite Danny Devine appearing to head off the line.

“We’ve picked up a bad habit of taking the lead and not seeing it out. It ended up a bit ragged and certainly could have been a lot worse but it should have been better.

“We started the game poorly and they could have taken the lead but we weathered the storm and took the lead, maybe against the run of play at that point but we played really well after the goal and could have got another. We could have been further ahead but let them back into the game.”

Hearts seemed to come more into the game once Christie Elliott had to be replaced in the second half due to injury. The enforced change required a defensive reshuffle with McGinn having to move to left back, he admits it took a bit of getting used to.

“When we lost Christie it knocked us a bit, we became a bit unorganised and it cost us. I think it says a lot about Christie that he has been playing for so long and so well over on the left on his wrong foot. We had to change things and I moved over and it maybe took me a while to get going, it was tough not use my instinct and go for it on my right foot but I feel I got there.”

Paul does however feel if required it’s a position he can play.

“If required it’s a position I can play, I’ve played left back in the past and I’m ok on both my feet. I can play there if needed, obviously it’s easier to start the game there and have some preparation rather than switch half way through so i can play there if the manager needs me to.”

Despite the draw the defender thinks there are a lot of positives to take from the game and those before it, just need to turn the draws into wins

“We can take positives from the game, it’s three league game undefeated and a draw over ninety minutes in the cup too. If you look at all four then on our day we could have won them so we have to take the positives from that but we need to start winning games.

“We need to win games, we need to be more clinical and maybe with that extra cushion of two or more goals it’s easier to see the game out and defend it. ”

“We go into a hard game against Motherwell next, they are on a good run and have their own unique style. It may not be the most pretty but it’s effective, they work hard and they have two forwards we will have to watch. We need to be on our game to get anything there.”

More reaction from Daniel Devine and Miles Storey as well as Jags gaffer Alan Archibald is available now to Jagzone subscribers. Log in now to see it.