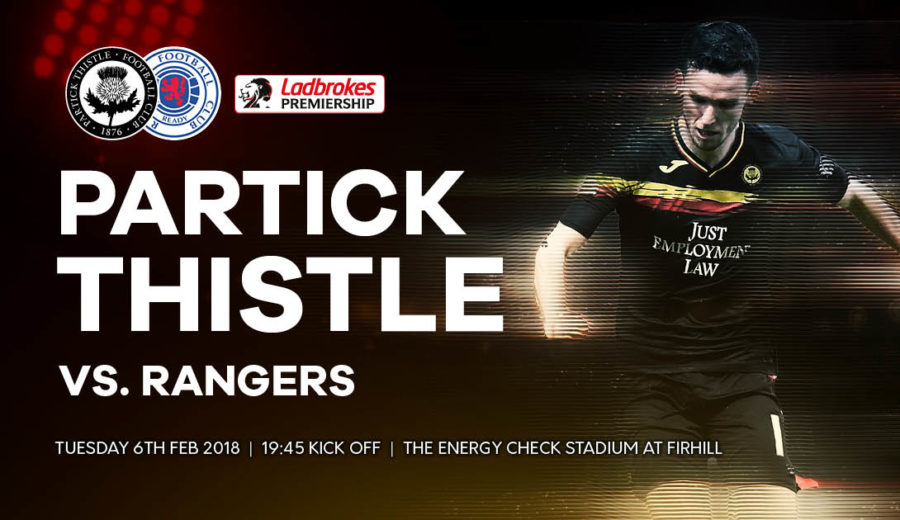 Paul McGinn is hoping to keep Thistle’s good run going by defeating Rangers at The Energy Check Stadium at Firhill.

The win would move Thistle further up the table and the defender is hoping to take all three points against our local rivals.

Speaking to ptfc.co.uk before the game, McGinn said: “We go into the game with a lot of confidence. We’re on a good run of form. We’ve picked up some good results, some wins and even the match against Celtic that we lost we played well, we could have easily taken something from the game so we have to put in a similar performance and just improve on a few things”

With the away win duck broken, Paul knows the important of keeping the home form going while adding those away points to the total.

“Our home form has been good this season, we go into any game at home believing we can win the game. It’s somewhere we enjoy playing and try and make difficult for other teams to come play. We want them to fear coming to play us.

“The fans are great with us too, they didn’t get on our back when we were in that bad run at the start of the season and always support us and that gives us a massive lift both home and away. They really do make a difference to us.

The right back knows it’s a tough week ahead with the match against Rangers followed by a Scottish Cup game against Celtic but he sees no reason why we shouldn’t go into the week looking for two wins from two.

“We’ve got a tough week coming up with Rangers and then Celtic in the cup but I think we go into them believing we can win both. Both teams have shown recently they can be got at. We are a good team and there is no reason we can’t do the same. We know it will be a tough game on Tuesday but we think we can take the three points.

“You look at Rangers getting beat and you think we could do the same, if other teams can do it, why can’t we. We are a good side and we can go out and show it.”

Rangers were defeated by Hibs at the weekend with Paul’s brother John opening the scoring, now he’s hoping to follow in his brothers footsteps

“It would be great to follow my brother in getting a goal against them; another 25 yarder would be even sweeter!

“They will be hurting after the defeat, It could work out either way, they could come out low on confidence which we could take advantage of if we start the game well or they could come out angry looking for revenge. We need to just worry about ourselves and how we perform.”

Paul admits confidence is vitally important and continuing the current run of form and results is massive.

“Confidence is massive, when you are winning games and performing well the whole place gets a lift, everyone has a spring in their step and it can make such a difference to your performances. It really is a massive thing and right now we are in one of they runs where everyone is flying and we hope to keep that going.”

The Jags number sixteen is enjoying life in red and yellow and even more so with the bigger squad to help with bodies.

“I’m really enjoying being at Partick Thistle. It’s a great place to be. It’s a well-run club and professional throughout which always helps a player.

“It’s great having players back from injury. Obviously as a full back, we were a little thin on the ground and it meant playing in every game in December, as a player you want to play in every game but before you realise it, with so many games you are soon running on empty. So it’s great to have players back, it’s good for team spirit and it always spurs you on that extra competition in the squad.”

More exclusive preview interviews with Miles Storey and Jags gaffer, Alan Archibald, are now available to Jagzone subscribers – log in to see them. Jagzone members will also be able to watch highlights of the game from midnight.