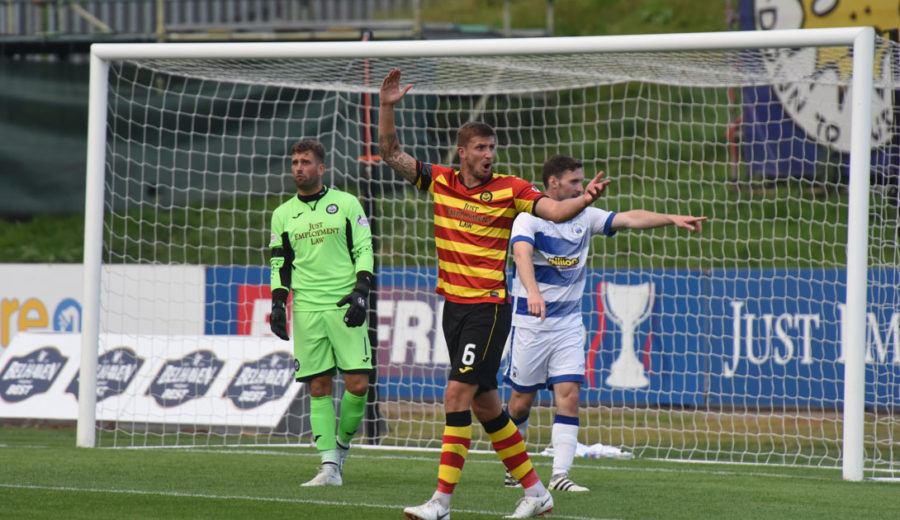 McGinty delighted to grind out win

Sean McGinty enjoyed his first experience of The Energy Check Stadium at Firhill as Thistle moved clear at the top of Betfred Cup group E with a 2-1 victory over Morton.

A dominant first half saw Thistle 2-0 up but a second half Morton goal set up a nervy finish. However, Sean was just delighted to get the win.

Speaking to ptfc.co.uk after the game, he said: “It was pleasing to get the victory. That’s two in a row which is a good way to start the season but we feel we could have played better.

“I didn’t think we played well enough second half, our level of performance wasn’t there and didn’t match up to what we done in the first half.”

McGinty was happy with the first half showing and the way they ground out the victory towards the end.

“First half we played really well, we passed the ball about well and really made them work. Second half we weren’t really us, we were maybe lucky to hang on at the end but we got the result which mattered.

“Few of the boys said last season they might have conceded at the end so it was pleasing to grind it out and get the victory.”

With Morton in our division next season it was a chance for the squad to test themselves against what they will come up against and the defender was glad to have come through on the winning side.

“It was especially pleasing to beat a team in our division, it was a much tougher test than Saturday, they showed us what they can do in the league but I thought we defended well and stayed strong to what they threw at us after their goal.

“It was pleasing that we didn’t played our best in the second half and still came through with the win. We could have let our heads go down but we didn’t, we kept going and done what we needed to do.”

The Thistle number six admits there’s still a lot of work to do ahead of the league kick off but it’s work that will be done.

“We know there’s still work to do, we have a few weeks before the start of the season to iron things out, to work on things we have to improve on and get ourselves ready for that.

“We are still forming that relationship both between the defensive partnership and the defence and the midfield. I thought we dropped a little too deep in the second half and that maybe didn’t help us.

“We’ll work on that, work on the other things we need to, we know we aren’t the finished article and we’ll continue to work hard each day in training.”

It was the Englishman’s first experience in front of the home Jags support and he enjoyed it.

“I enjoyed my first experience of playing here. It’s a really nice stadium and a fantastic pitch, and it was great to play in front of the Thistle fans, I’m looking forward to many more games here.”

Thistle sit out the round of fixtures on Saturday before facing Albion Rovers next Tuesday in another important game.

“It sets up for the games coming up, we have Albion Rovers next which we need to go and get the win which would set us up with a game here against Ayr and we know if we win that we would top the group.”

More reaction from Tam O’Ware and Jack Storer as well as Jags gaffer Alan Archibald is available now to Jagzone subscribers. Log in now to see it.

Sean will be here for the next big moment – will you? 2018/19 season tickets are on sale now – buy yours here.