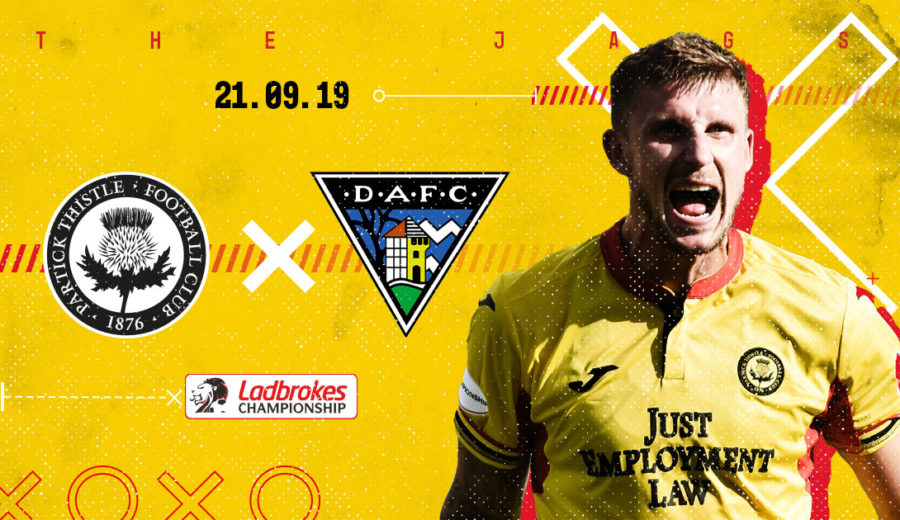 After a busy week at the club, focus has turned firmly towards tomorrow’s Ladbrokes Championship fixture against Dunfermline Athletic. The interim management team of Gerry Britton, Scott Allison and Kenny Miller have had the opportunity to take two training sessions with the squad and ptfc.co.uk caught up with Jags number six Sean McGinty to look ahead to tomorrow’s game against the Pars.

“It’s been a bit of a strange week. We were really bright in training on both Monday and Tuesday with a real determination to put things right from last week and go into Saturday positively as we know it is a massive game. Obviously things changed on Wednesday. However, we had a good session on Thursday and you could see that all the squad were really focused. The boys look ready and we’ll take it into Saturday’s game, which is key. We’ve got to put things behind us and work together to get the three points.”

With three huge matches coming up for the club in the space of eight days, the preparation and focus has been firmly on returning to action on the Firhill pitch this Saturday afternoon.

“We’ve got three really tough games coming up with Dunfermline, who are just below us in the table, first of all and our whole mindset has to be focused on that. We know we have the big cup tie on Wednesday night which is good to look forward to but it’s been our league form which has been troubling so far so we have to get that first win on the board to get our season going.

“It would be a huge confidence booster to get that first league win of the season tomorrow. We’ve been very close on a couple of occasions and had spells where we’ve played really nice football but it’s been key moments where we haven’t been good enough that have cost us and we need to cut those moments out if we’re going to win games.”

Sean may have been wearing the captain’s armband recently but there are a number of leaders throughout the squad who have been making sure that attention is firmly on the visit of the Pars.

“There are plenty of leaders in the dressing room and it’s up to those guys, including myself, to step up and make sure everyone is united. If we’re going to get a win this weekend, we’ll need to work as a unit and stick together so all focus is on going out there and putting together a complete performance.”

Finally, McGinty had a message for the Jags support ahead of tomorrow’s Ladbrokes Championship encounter.

“It’s been a tough week for everyone but now more than ever we need the fans and the backing they bring. So far this season they’ve turned out in excellent numbers at every game and we haven’t been able to repay them in the league but they can rest assured that we’ll be ready to fight and scrap for everything come 3pm on Saturday.”

With the Club currently undertaking a change, we want to keep all Thistle supporters up to date. That’s why, for this weekend’s match against Dunfermline Athletic, all preview and reaction videos will be free to view for every Jags fan.