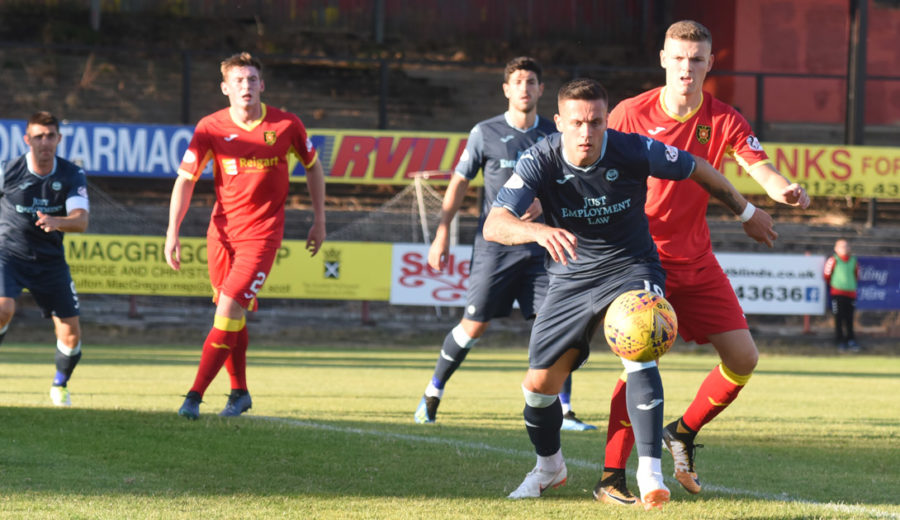 MILES STOREY: I WANT TO KICK ON AND SCORE MORE REGULARLY

It’s been an uncertain summer for Thistle’s new number 19, Miles Storey. The ex-Aberdeen frontman had been on the transfer list for two months but after signing a revised contract last week, he’ll be with the Club for the 18/19 season. As such, Miles was back in from the start against Albion Rovers last night and the Englishman made the most of his opportunity, grabbing the opening goal and winning the JagZone Man of the Match award at Cliftonhill. With that goal, he is now off the mark for the new season and Miles spoke to ptfc.co.uk after his first 90 minutes of the campaign.

Miles began by telling us that it’s a relief to get his first goal of the season just three games in, setting him up for a positive Championship season.

“I’m glad to get that goal early doors. Last season, after I signed, it took a while for me to open my account for Thistle and the first goal of the season was weighing over me a bit but that’s out of the way already for this year. I’m happy it was an important goal too. It was the opener in a tough game and not just a third or fourth in a big win. My two goals last season were winners and they always feel good but I want to kick on and score more regularly than I did last year.”

Storey played right across the front at various stages throughout the game, getting time on the right, the left and through the middle but he says he doesn’t mind where he plays, so long as he’s out on the pitch.

“I was just really happy to get my first start. Obviously, having been transfer listed, I wasn’t going to be starting but now that the contract is sorted, I can get back to playing. With Chris Erskine missing, it opened up a space for me and the manager gave me my chance which I feel I’ve taken. Chris should be back in the squad for Saturday but I hope I’ve at least given the gaffer a bit of a decision to make after tonight.”

We know the number 19 enjoys using his pace but Storey admitted that a very bobbly surface made it difficult to keep the ball under control as he tried to race away from the Albion defence.

“I was looking to take my man on a bit more today as it’s something I didn’t do enough last year when I had the chance but the pitch made that tough. On the wing, you’re operating in a very narrow area and once you knock the ball down the line, one awkward bobble can take it out for a throw-in or make you lose control. Nevertheless, I managed to get a couple of crosses in and linked up with James Penrice a couple of times but when we’re back at home on Saturday, I certainly won’t be missing this park.”

“We see the talent that Aidan has in training all the time. He’s quite similar to myself in ways. He likes to drive with the ball and has that turn of pace. Over the summer, he’s been in with us every day and you can see why he was so highly thought of in the academy. He did well in the close door games we played and grabbed a goal in one of those games so hopefully his goal tonight sets him up to play an important part in the squad this season.”

We then looked forward, with Miles, to Saturday’s crunch match against Ayr which will decide who tops Group E. Ayr have been flying so far in the Betfred Cup but Storey hopes that the Jags can try to outplay the visitors with some of the football we saw in the first 45 against Morton.

“Getting back to that pitch will be good. Everyone saw what the team is capable of in the first half last Tuesday. I wasn’t on the pitch at the time but the guys who were said that it was very enjoyable because there was a bit more freedom than we had throughout last season. Ultimately, that’s the style of football we want to play but we have to produce it over 90 minutes. Ayr have been comfortable in their three games and have been scoring for fun so while we look at our style of play, we also need to focus on stopping them.”

More reaction from Kris Doolan and Aidan Fitzpatrick as well as Jags gaffer Alan Archibald is available now to Jagzone subscribers. Log in now to see it.

Miles will be here for the next big moment – will you? 2018/19 season tickets are on sale now – buy yours here.