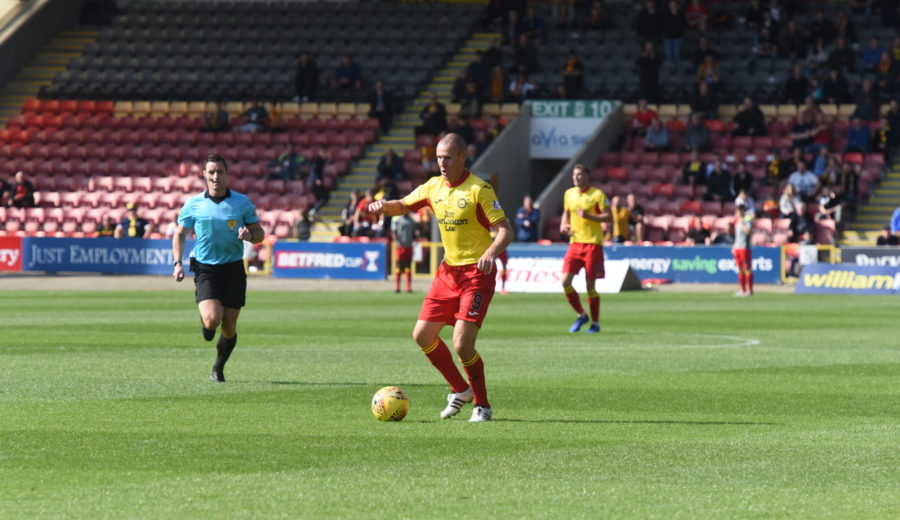 Kenny Miller was thrilled after a 3-2 victory over Ross County sent Thistle through to the quarter-final of the Betfred Cup.

Miller took the match to extra time with a goal ten minutes from the end of normal time before Thistle notched two goals in extra time through James Penrice and Steven Saunders to go marching past the Premiership opponents and into the next round.

Speaking to ptfc.co.uk Kenny couldn’t wipe the smile off his face: “We’re absolutely buzzing to get through to the next round! I think we deserved it too if I’m honest.

“We rode our luck a wee bit at points. They hit us on the break on a few occasions and made some good chances, but I thought we played some really good football over the 120 minutes. We scored three good goals and I think we were well worth the win”

The striker spoke of a week of hard work in the wake of a disappointing defeat last week and admits it paid off.

“We did some really good work this week in training, we had a really hard-working week and there was a real positivity coming into the game.

“We’re always looking to improve but we saw a lot of that today. There are still things we can brush up on but it was really pleasing to go out and do what we did.

“They are a premiership team; they are a good side and I think they’ll do well this season so to go out and play like that and get through to the quarter-finals is especially pleasing.”

Thistle got off to a bright start and it was something Miller feels is important, especially at home with the Thistle support behind the team.

“When you are home you want to start quickly, you want to start well, get the fans on their feet and really set the tempo and I thought we did that. Our back line was high, and we were on the front foot for most of the opening period of the game.

“They had spells in the game we had to deal with but you are going to have that against good sides. We had to show good character to come back when we went behind and then again when they came back after we had gone ahead.”

Character and belief; two attributes the manager has discussed a lot this season came out in abundance as Thistle fought back from falling behind and then the blow of County drawing level in extra-time after The Jags had gone in front and that was something which pleased Miller.

“We’ve spoken about it a lot during pre-season and before the game. That we have to believe in what we have been doing. No matter what happens in the game you have to keep going and we did that and that was really pleasing and something that will stand us in good stead over the season.

“There was real belief in what we were doing, and I think that is why the performance was so good.”

The players put everything into the game putting their bodies on the line to see the game out but the Thistle number 9 says it was all worth it.

“We are a really fit team and worked on that during pre-season and we saw the benefits today, there are a lot of tired muscles in there because everyone really put everything into it but we got our rewards and the feeling of winning far outweighs the pain in the legs.

“It’s important now that we go and get that first league win. I know it’s only been two weeks but today has to drive us on in the league. We have to use today as a benchmark on how we want to play, and we start that against Morton next Friday night.”

Reaction from James Penrice and Steven Saunders as well as Thistle gaffer, Gary Caldwell is available to Jagzone subscribers now, hear what they had to say here.

Highlights of the match are also be available to view free for Jagzone subscribers – watch them now.