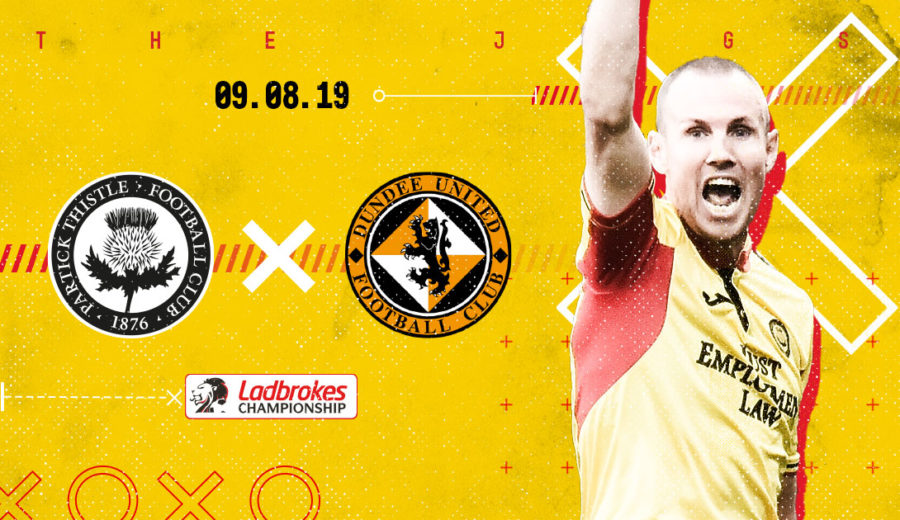 Thistle return to The Energy Check Stadium at Firhill for the first home league game of the season and Kenny Miller is hoping to get it off to a winning start as early favourites for the league, Dundee United, visit Maryhill.

Miller is experienced in the big night TV games but he is looking forward to his first in Red and Yellow.

Speaking exclusively to ptfc.co.uk he said: “It’s under the lights, friday night at home against a good team, it’s a game you want to go out and play in.

“It’s a big game for us. It’s our first home league game of the season and we want to go out and get all three points.”

After a good start with progression in the Betfred Cup Miller knows the result against Alloa was disappointing, but he hopes to put that right against Dundee United.

“We want to build on a positive start in the Betfred Cup. We were disappointed with the result and performance last week but on the balance, we didn’t deserve to win the game. So, we take it as a point and go out tomorrow and look to take all three points with a much better performance.”

The striker knows the importance of home form and hopes to get that off to the perfect start.

“It’s a game against a team who have been billed as the favourites for the league, but we want to go show we are a good team too. We want to show that we can and will be up there challenging.”

The Thistle number nine missed out from the start last week but impressed after coming on. He’s feeling good and ready to go from the start if called upon.

“I’m feeling great, I probably just needed to give it that wee bit of rest and couldn’t start the game, but I came on and felt good and thought I was able to make a contribution. I’ve been working more this week and I’m ready to go.

“We are focussed on getting a result and we have been positive in the build-up to the season so we go out looking to win the game.”

Miller arrived during the summer and is enjoying life as a Jag so far. He’s hoping to use his experience to help the younger players in the squad.

“I’m loving it. It’s a fantastic football club with a lot of good people. I know the manager and assistant very well. I’ve known them dating all the way back to the Scotland Under 21s and I’m impressed with the work they are doing. I’m enjoying it and feel like we’re getting towards where we want to be so long may that continue. Hopefully we can make it even better with a win tomorrow.”

As an experienced head, part of Miller’s role was always going to involve nurturing Thistle’s young talent and it’s a role he is happy to play.

“That’s part of the reason the manager brought me in, I can pass on my knowledge and help the younger players. I’m really impressed with young Lewis and feel he is getting better all the time. He had a positive Betfred campaign and I think once he gets his first goal of the season he can go on and score many more.”

With a lot being said in the press about off field matters Miller is adamant that the players will only focus on what they need to.

“The players are all together. We can only control what happens on the field. We can control the work we put in Monday to Friday and what we put into a game. There is a lot of noise surrounding the club, but we don’t focus on that. We focus on us as players and winning football matches.”

He did however admit the fans backing is important and hopes the Red and Yellow Army continue to get behind the side.

“The fans are very very important at any football club. They have a big role to play in getting behind the team and helping us get to where we want to be. However, we know that it is up to us to make them positive. We need to get them out of their seats and get them right behind us. We are really confident as players that we can have a good season and hopefully the fans are too.

“The fans have been great over the first month of the season, they have given us great backing and, even at Alloa when we weren’t the best, they still got behind us and that is important”

More exclusive preview interviews with Sean McGinty, Jame Sneddon and Jags manager, Gary Caldwell, will all be available to Jagzone subscribers this afternoon – log in to see them.

Can’t make it to the Energy Check Stadium at Firhill? JagzoneLIVE begins at 6:50pm tonight.