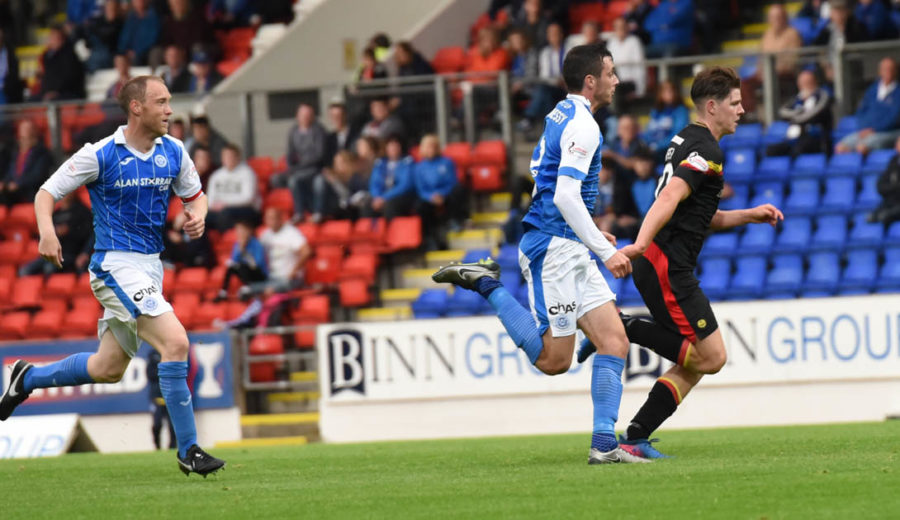 This season has been an interesting one for Kevin Nisbet so far. The 20-year old netted his first goal for the first team in a friendly against Dumbarton. He then came on as a sub against Livingston, St. Mirren and Airdrie before making his first competitive Thistle start against Stranraer. He was then thrown into the team for the new Ladbrokes Premiership season when he was subbed on in the first half of Saturday’s league opener at Hibs due to Kris Doolan’s injury. Tonight, he was presented with another first team opportunity with Doolan still out. Nisbet started for Thistle in their Betfred Cup round of 16 meeting with St. Johnstone and put in an impressive performance. His energy and determination caused the Saints defence no end of problems and he won the penalty that led to the opener in the 3-0 win. Kevin spoke to ptfc.co.uk following Thistle’s progression to the quarter-final.

As is so often the case when Thistle and St. Johnstone meet, the team who scored first won and Nisbet believes that the opener, which came five minutes after the break, allowed the Jags to settle into the match and control the second half.

“I think getting the goal so early in the second half helped the team. The penalty calmed the lads down and I think some of the cagey-ness went away as they had to open up a bit more which created more space for me, Ryan Edwards, Steven Lawless and Chris Erskine to play in.”

On Saturday, Kevin wasn’t expecting to be thrown in the mix so early at Easter Road and he felt that knowing he was going to start made it easier for him to bed into the game.

“I got into my stride much more easily today. At the weekend, I was a bit off it and my play was disjointed at times. Playing from the start let me find my game quickly and meant that my teammates were in the mindset to play to my strengths.”

One of Kevin’s strongest areas is his hold-up play and he reckons that his task was made much easier tonight by the fact that players like Chris Erskine and Ryan Edwards were supporting him and running beyond him.

“It definitely helps to have players who aren’t afraid to make a run around me. Although I think my hold-up play was good tonight, if they hadn’t been making themselves available then I’d have just lost possession every time. Everyone knows the energy that Ryan has and Chris knows exactly when to make the right runs so I reckon having a player to hold-up the ball, whether it’s me or Kris Doolan, helps them too.”

Despite his great team play, Kevin wasn’t quite able to grab his first competitive goal although he did have a couple of chances. The striker knows that if he keeps getting opportunities and keeps working hard then he’ll break his duck soon.

“Hopefully, the goal isn’t too far away but it’s more important that we perform well and win games. If we can win some games without the striker scoring, then that’s a good sign in my eyes as it takes some of the pressure off us strikers. Obviously, I’d love to grab a goal but I was happy with my overall play today, winning the penalty and creating a few opportunities.”

On Friday Thistle take on Celtic at Firhill. With Kris Doolan still very much a doubt, Kevin hopes that his performance tonight can give the gaffer a decision to make up front.

“Of course, it’s a huge occasion and we’ll have to wait to see if Dools will be ready but hopefully the manager considers tonight’s game when picking the team. It’s a big game but I could handle the pressure. I’d probably spend a lot of time isolated up front if I were to play so my hold-up would come in useful.”

More reaction from Ryan Edwards and Jordan Turnbull as well as Jags gaffer Alan Archibald is available now to Jagzone subscribers. Log in now to see it.

Kevin has committed, will you join him? 2017/18 season tickets remain on sale.