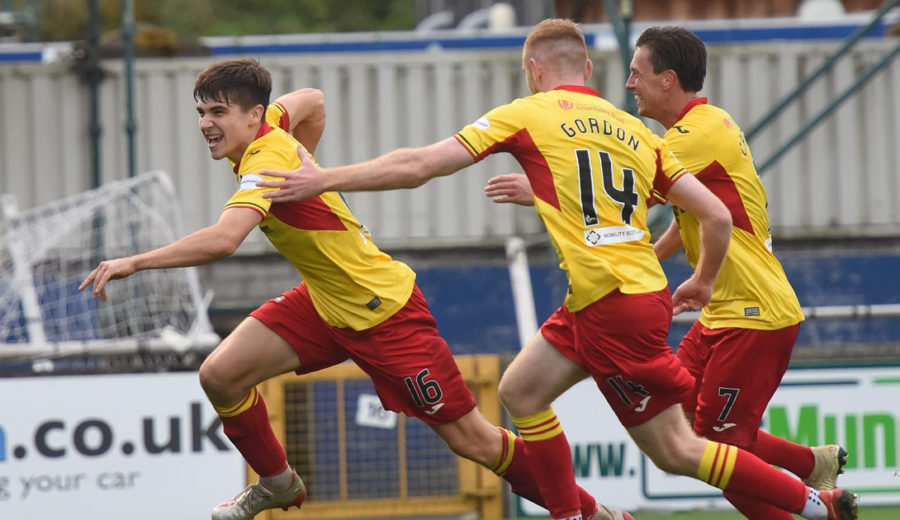 Palmer slotted home James Penrice’s cross with eight minutes remaining and speaking to ptfc.co.uk he admits it was an amazing moment.

“It’s my first professional goal, When the ball went in, I didn’t really know what to do. It was an amazing feeling to score my first goal, I went to run away to celebrate and I slipped, so everyone just took the chance to jump on top of me. I ended up face down in the mud but it was all worth it for that feeling.

“It’s great that it was such an important goal too, Inverness were pushing and it really sealed what was a really important win, we knew how important winning the game was.”

Palmer’s goal allowed Thistle to relax towards the end of the game and see the game out and he admits it’s something he want to add to his game.

“It was a big relief, I think getting that third goal really made a difference and with the experience we have in the team we were able to see the game out and get the three points.

“It obviously doesn’t happen very often, it’s something I’m trying to add to my game and score more goals and contribute more to the team.”

“Its a tough place to come and get a win but we really worked hard and we got a deserved win. I thought it was a real team effort.

“I think everyone is just delighted to get the first win of the league season, we’re all just looking forward now to trying to build on that and kick start the season. ”

The Jags number 16 knows they have to now build on that result.

“It was a great win but it doesn’t mean anything if we don’t kick on from here and go and perform the same way next week. We feel when we do play like that we can be a match for anyone and we have to make sure that is a marker and we only improve from here.”

“The fans were fantastic, it’s brilliant to know we sent them away happy. They made such a long journey and we know they follow us all over the country and it’s hard for them when we aren’t getting results so that win is for them.”

A more in depth video interview with Neil Scally is available to Jagzone subscribers now as well as Thistle players, Stuart Bannigan and Dario Zanatta – log in to view.