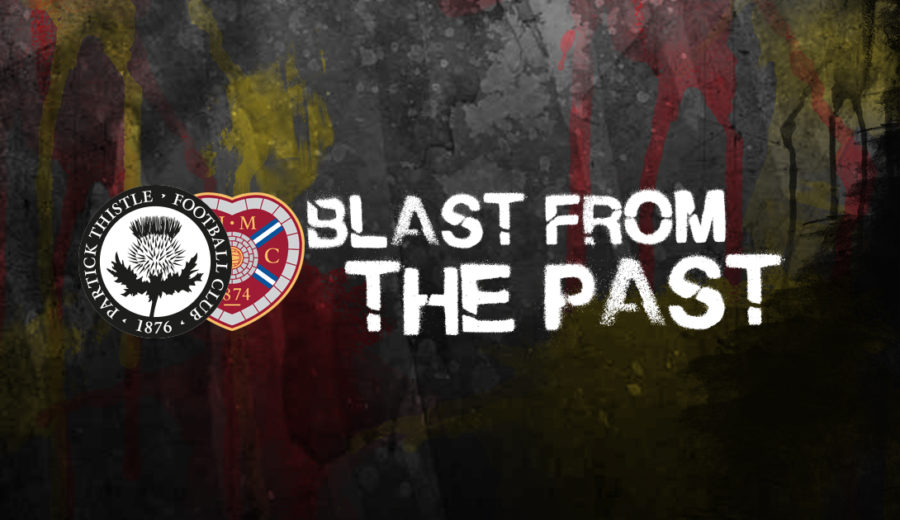 This is all a bit complicated. The front cover of the programme shows the date as 4th March 1995, which is when the fixture was originally scheduled to take place. However, on that day strong winds and increasingly persistent snow forced referee Jim McCluskey to abandon the match after 57 minutes. The score was 0-0 at the time, so there was no reason for ill-feeling or controversy on the part of either set of supporters.

When the match was re-played on the 4th of April, Thistle got off to a pretty horrible start with Millar firing Hearts into the lead after just 7 minutes. We looked to the leaden skies to see if the elements might come to the rescue, but in vain.

Anyway, there was no further scoring in the first half. Much to our delight, Thistle put in a really strong second half performance, shooting towards the end where Kris Doolan notched goals 96 and 97 last Saturday – still enjoying that!

The equaliser came along in the 64th minute from the lethal left foot of American-born Steve Pittman and it was a real belter. Thistle’s tails were up now and ten minutes later we gained the lead through Rob McDonald. The icing on the cake was provided by Derek Williams and Thistle ran out convincing winners. The full Jags team were as follows: – Nicky Walker, Kevin McKee, Steve Pittman, Gregg Watson, Steve Welsh, Tommy Turner, Rod McDonald, Albert Craig, Wayne Foster, Ian Cameron, Derek McWilliams. One of the substitutes was Alex Taylor. With regard to the other one, how’s your memory? The name is Roger Eli from Scunthorpe United, who was seen no more, having made two substitute appearances.

Reverting to the featured match, this was a good result for Thistle, because the men from Tynecastle were certainly no slouches, considering the fact they had players of the calibre of Fraser Wishart, Craig Levein, Jim Bett, Dave McPherson, John Culquhoun and John Robertson. It was significant that Gary MacKay, who had featured more than 500 times for Hearts’ first-team, was on the bench.

I am sure you will be pleased to see on the programme cover a picture of one of Thistle’s all-time greats, Jackie Husband. With the stand being named after him, he will forever be remembered as one of Thistle’s favourite sons.