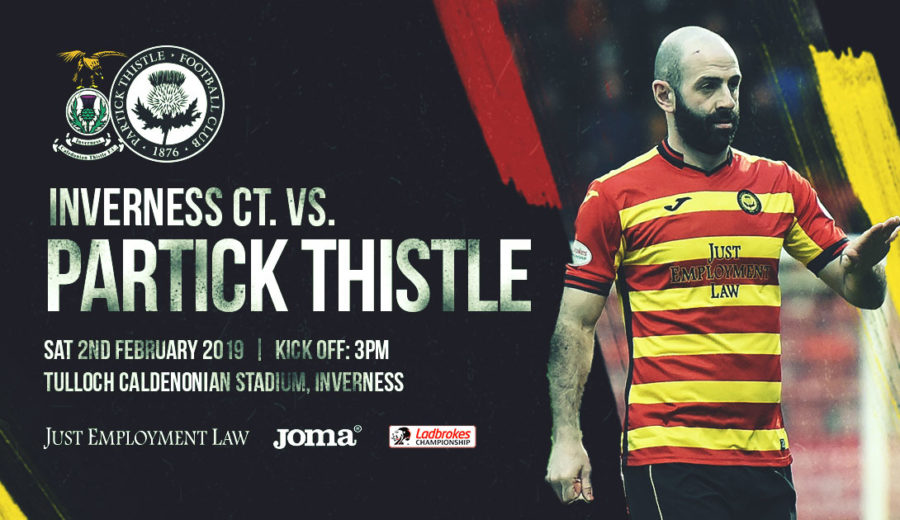 Real quality has started to show in 2019 says Gary Harkins

Gary Harkins had to sit out Partick Thistle’s win over Queen of the South last Saturday after he picked up two yellow cards against Falkirk. Missing out on playing against his former team was a blow but the midfielder is back and available for selection as the Jags travel north to take on Inverness in the Ladbrokes Championship.

Thistle are defending an unbeaten record in 2019 and will go into the tie in a confident mood. Despite a poor record against Caley this term the Maryhill men are focused on coming out on top this week with three points the massively valuable prize up for grabs.

The Jags’ number 11, Gary Harkins, spoke exclusively to ptfc.co.uk ahead of the fixture in the Highlands:

“We’re going into this game believing that we can win. We’ve showed our quality since the turn of the year and even though we should probably have had more points overall, the win last week is a real confidence booster for everyone.”

Thistle have struggle on the road this season but Harkins is looking to more recent events for encouragement.

“I can only speak for the time that I’ve been here and in that time we’ve only had one away match; at Dundee United. On that day I thought we were great, especially for the first 45 minutes, and we should have come away with all three points.

“If we can carry that sort of energy into this away game and play our way rather than letting the opposition dominate play then I don’t see why we can’t get a win.”

Although Gary was pleased for the team as they beat Queen of the South 2-1 on Saturday, he was a bit disappointed not to be involved in a very good display from the home side.

“It was quite frustrating because I’ve been enjoying my time playing at the Club again and I still don’t think I should have been sent off. At the end of the day though, the boys did brilliantly and got a great three points which is what it’s all about. It builds on the solid platform we have built so far this year and it gives us all a bit of confidence and positivity going into this weekend’s match.”

Following the conclusion of the January transfer window yesterday, and with the finishing touches being applied to the squad earlier this week, Harkins feels that Gary Caldwell has built a strong squad as the Jags aim to escape the bottom of the Championship.

“There’s a lot of talent in that dressing room and there’s a good atmosphere at the moment. We have a great blend of youth and experience too which is very valuable in this league.

“This month, the gaffer has really boosted the competition for places right across the pitch which can only be a good thing. Each player is pushing another whether that be in training or in games because we all want a spot in that team.”

Inverness earned a terrific result in midweek as they took all three points from Somerset Park in a five-goal thriller. Despite Tuesday’s result Harkins says that the travelling Jags should focus on playing the best they possibly can as they seek the maximum points.

“Of course, Inverness are a good side but we’ve shown that we can play at a speed and with a tempo that would be too much for any team in this league. We have a game-plan and we believe that if we can execute that plan then we’ll win so that’s up to us as players to go out and produce a performance.”

More exclusive preview interviews with Aidan Fitzpatrick and James Penrice are available to Jagzone subscribers – log in now to see them.

Can’t make it to the Tulloch Caledonian Stadium? Jagzone members can listen to live audio commentary of the match. JagZoneLIVE begins at 2:45pm on Saturday.