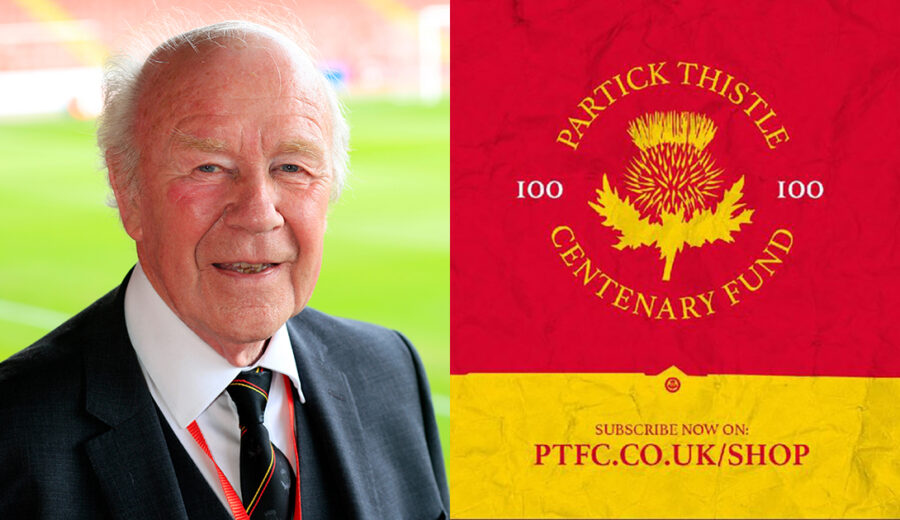 It seems entirely fitting that the last big Centenary Fund prize of 2021 – a truly special year for Thistle – should be won by the man who arguably knows the club’s history like nobody else.

Almost 50 years to the day since he took in a certain Scottish League Cup Final, Robert’s name was drawn from hundreds in the hat. So did he take the car or the cash equivalent? No spoilers please – Reid on …

Robert takes up the story: “I’ve been paying into the Centenary Fund since the very start, the first draw, so I do feel like I’ve earned it – I’ve paid a fair bit in so this is really just getting something back. It’s never been about winning of course, but it was a lovely surprise to be told I’d won.”

And did winning towards the end of 2021, a year of so many special anniversaries, make it that little more special?

Robert: “Yes, 2021 was quite a year wasn’t it! Contrary to popular belief, fuelled by my current osteo-arthritic walk, I wasn’t there in 1921. I do think I’ve read everything there is to read about our Scottish Cup win though.

“As for 1971, I could talk all day about it. Like so many Thistle fans who were there I do remember at half-time genuinely disbelieving the situation, I still wasn’t convinced we would win. They had so many good players – in my mind Kenny Dalglish was more than capable of scoring one, two, three goals if they got one quickly. However we all know what happened and it was to be the greatest afternoon in the history of our club.”

What many people won’t be aware of, touching back on the subject of cars, is just how close Robert came to missing that greatest day.

Robert: “That’s true. I was almost in a bad car accident in the morning. My car was playing up so I took it to a quiet spot to test it, the bonnet flew up when I was going at a decent speed and I managed to hit the brakes just before I hit anything else. I was so fortunate not to be in a bad accident – and so fortunate not to miss that famous afternoon.”

There was agony before the ecstasy though, as Robert explains: “I also was present and suffered the agony of three Scottish League Cup final defeats in the 1950s – East Fife 1953, Celtic after a replay in 1956 and Hearts in 1958, all painful to say the least.”

Of course, those three finals and that special October 1971 afternoon are just four matches of many, many Thistle games Robert has witnessed over the years – does he have any idea exactly how many?

Robert, mulling it over before speaking, said: “I would reckon we are close to 3,000 games in my lifetime. I had a couple of runs of 500 consecutive matches only broken by weddings which weren’t worth my life missing!

“My programme collection mirrors my attendance to an extent so you can imagine how much of the house it takes up! They are in alphabetical order, the first in the collection being Aalborg 1974 challenge match (Bertie Auld’s first game). This programme is the very first one in the collection as as the Aa of Aalborg edges just in front of Aberdeen. Thistle fans reading this can guess the last programme in my A-Z.

“In addition to programmes, the first of which is dated 15th November 1930, Thistle 2 St Mirren 1 – I wasn’t at that game either – I also have various items like wages books from 1903 and handbooks from over the years. Additionally, for many years, I have kept a detailed record of every Thistle game, writing it up as soon as possible after the conclusion of the game when the details are still fresh in my mind. I shall do this today, One obvious difference is that the modern details have to include a large number of substitutions!”

“It was really special, no question about it. A unique achievement given the situation we were faced with through no fault of our own, which was a great worry at times because of Covid but we got there and it was fitting to lift a trophy given the year.”

So is the starting XI of 29 April 2021 another one that Robert will be able to recite from memory?

Robert (laughing): “Yes, it’s important to remember these successful teams, in particular the 1921 and 1971 teams. I’ve recited the 1921 team many times even though I wasn’t there. As for the 1971 team, I’ve read those names out countless times and will never tire of doing so – I’m sure many other Thistle fans are the same, and for those who haven’t I’d encourage them to memorise them. The heroes of 1971 gave us our greatest hour and a half and it’s only right their names live forever.”

Hear hear. Which means only one question remains … car or cash?

Robert concludes: “I had to choose the cash, as the car is of no use to me right now due to fitness problems. I’m very grateful for the prize – and I’ve spent some of it already, including on my latest Centenary Fund payment!”

Huge thanks and congratulations to Robert Reid from all at the club and at Macklin Motors too.

If, like Robert, you’d like to be in with a chance of winning a car in our next big prize draw, join the Centenary Fund today: https://ptfc.co.uk/fans/centenary-fund/join-the-centenary-fund/