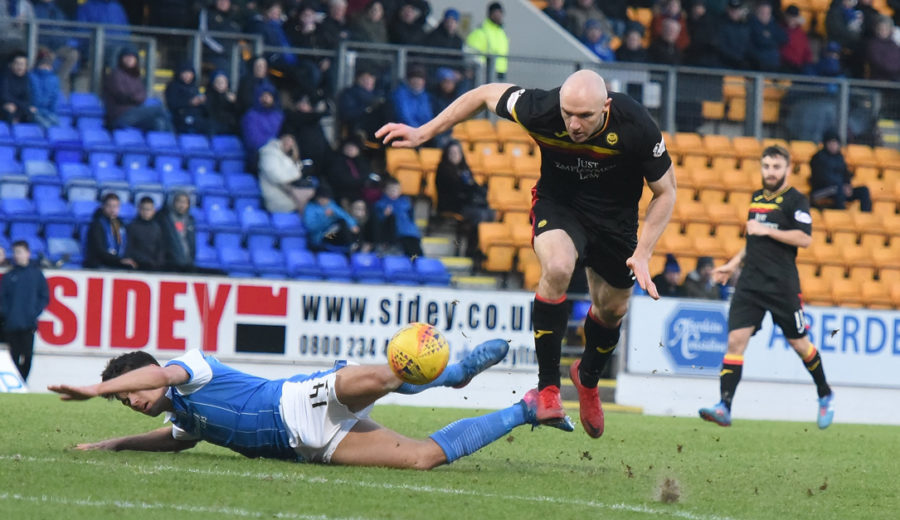 Sammon: It’s a terrific result for the team

Conor Sammon signed for Partick Thistle at the beginning of August and experienced a tough start to his career as a Jag, failing to score until December the 13th, however, in the month and a half since grabbing his first goal in red and yellow Conor has netted six goals in all competitions. The Hearts loanee scored two in December and bagged a brace in the Scottish Cup as Thistle returned from the winter break. He then found the net from 12 yards against Celtic before making it five goals in four games as he scored the Jags’ second on Saturday in their 3-1 win at McDiarmid Park. The on-form striker’s recent prowess has made him an important part of the Thistle team, who moved six points clear of bottom placed Ross County with victory on two days ago, and he spoke to ptfc.co.uk following the weekend’s clash with St. Johnstone.

Conor began by reflecting on the 90 minutes overall as the Jags achieved their first away win of the league season.

“It’s a terrific result for the team. There’s nothing better than hearing that final whistle go when you’re winning and that feeling is starting to become more regular, thankfully. It was a game that I thought we deserved to win but we didn’t make it as comfortable as it maybe should’ve been. Of course, we went 2-0 up just after the hour but the penalty got them right back into things and it was nervy. However, Ryan Edwards got that third goal and relief was probably the big feeling when that went in as those three points are vital.”

St. Johnstone went into the game having not played competitively since the end of 2017 and Sammon reckons that gave Thistle the advantage in the opening stages and played a part in the early opener.

“We definitely started the better team and looked sharper in general. Personally, I think that not having played recently would affect how you play. Most of our guys cleared any rustiness in our last two games but St. Johnstone haven’t had that chance and we tried to exploit that. In the end it worked for us as we got our goal in the 13th minute.”

Although, Thistle did go into half time with a one goal lead thanks to Steven Lawless’ first goal of the league season, Conor was slightly disappointed to be just one goal ahead as he felt the visiting Jags had looked the much more incisive side during the opening 45 minutes.

“We looked dangerous and we could have been ahead in the first minute or two when Chris Erskine played a good low ball across goal. I felt like I was very close to getting to it but it was just out of my reach and then Steven Anderson just hit the ball off Niall at the back post. I had a good chance too, with my left foot which just went past the post so I do think we were probably unlucky not to have a two goal lead at the break.”

The Irish striker has started six of the Jags’ last eight matches and goals have come with these more consistent starts. Conor feels having that run in the team has helped him finally hit his stride as a Thistle player.

“I’ve been desperate for a run of games in the team and the gaffer has given me that chance recently. I think I’ve taken the chance but it’s up to me to stay in the team now. If I continue to perform then the manager won’t drop me and that’s the motivation for me on a personal level and if that’s helping the team towards more points, then that will also help me meet my goals as part of this squad. I’m feeling good at the moment and long may that continue.”

One of the key moments of the game came when Ryan Edwards was introduced to the match on the hour mark, replacing Chris Erskine. The Australian midfielder added that extra bit of energy to the Jags side and he grabbed a goal and an assist while on the park as well. With a number of players returning from injury in the last month, Conor believes that the more complete squad will lead to more game-changing performances from substitutes like Ryan.

“A lot of credit has to go to Ryan because he did make a big difference. I’m sure, like a few of the lads, he’ll have been disappointed to miss out on a place in the starting XI but having players like him on the bench gives us a few back-up plans and makes it easier for the gaffer to change the game. For Ryan today, it wasn’t just his goal or assist but his work that was huge for us. He was all over the park and gave everything he had which is the type of player he is.”

Conor then mentioned the importance of finally getting an away win in the league. The Jags had failed to win on the road in the Ladbrokes Premiership all season until they got the victory at the weekend and Sammon knows that the Maryhill men must improve their record away from home if they are to climb the table.

“It’s one of those things that you struggle to understand. We’ve come onto a game at home recently but had still struggled away. Obviously, if you can’t win on the road then you’re going to be fighting for your life. We had gone a very long time without taking the lead away in the league but thankfully that’s come to an end. This win will hopefully be a catalyst for improvement though and we’ll be looking to build on it.”

The Jags look to build on the McDiarmid Park triumph with a trip to Fir Park. Thistle will be looking for a first win at Motherwell since the 90s and Conor Sammon will be looking to score in a fifth competitive game. Kick-off is 15:00 as Alan Archibald’s men make the trip to face the Steelmen.

More reaction from Baily Cargill and Ryan Edwards as well as Jags gaffer Alan Archibald is available now to Jagzone subscribers. Log in now to see it.