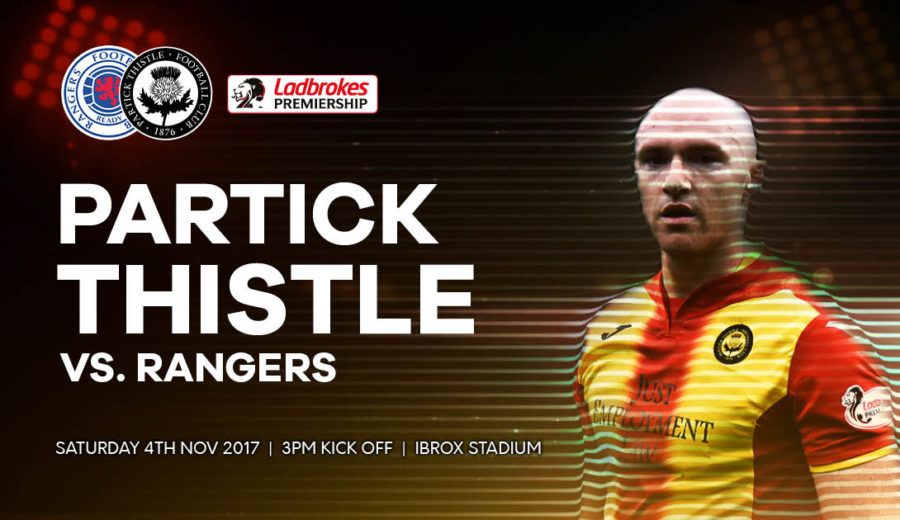 Sammon: We have what it takes

Conor Sammon is convinced Thistle have what it takes to get all three points at Ibrox on Saturday.

The striker feels confidence is high within the squad and they are flying ahead of the local derby against Rangers on Saturday.

Speaking to ptfc.co.uk before the match Conor admits after two close results this season it’s time for a win: “We’re all looking forward to getting out there and we are looking for another three points. We’ve had some really good games with Rangers already this season and we’ve ran them close twice already, we really should have really won at least one of them.

“That gives us a lot of belief and confidence going into the game. We know we can cause them problems if we play as well as we can and to our strengths.”

“We know it will be a tough test, Rangers are on the back of a good win against Hearts but we are on a good run ourselves. We go there looking to carry that run on and there is no reason why we can’t.

“Once you get a couple of wins you can feel the mood about the place lift, you can feel the confidence growing. It wasn’t a nice position that we were in a few weeks ago. We hadn’t won and we were sitting bottom of the table, that’s frustrating for us as players.

“We managed to get the first win and followed it up with a draw and another win. That’s a good habit to get into and we want to continue that on Saturday.”

The big striker has been on the winning side over Rangers in the past so knows exactly what it takes to come away with the win.

“We go into the game looking to cause Rangers problems, we have players that can hurt them and we have no fear. We know the players they have and they are a good team but so are we and we know how we can cause them problems.

“We know we have to be organised and every player needs to put in a shift. When we do have the ball we need to make the most of it and make sure our quality shows.

“Belief is important and we have to show that to cause them problems. There are a lot of factors we need to show but we will make sure we go out and show them all come 3pm on Saturday.”

The Thistle fans have yet to see a win over either of the Old Firm since promotion to the Premiership and Conor wants to give them a day to remember.

“It would be nice to get a win for the fans too, they always support us and travel In numbers. They are still missing a win against the old firm since promotion. It’s a local derby and it would be nice to give them the bragging rights.

“It’s an opportunity for us to be the first group of players to go and get a win there since the team came back up and that’s always special as a player, to be part of a moment the fans will always remember and talk about. Hopefully we can give them a good day out and give them plenty to cheer about.”

“I’m really enjoying myself so far. It’s a fresh start for me and there is obviously a lot of new things to get used to. When you are new to a set up and a set of players you need to settle in and get used to a style of play but I feel I’m doing that well.

“Obviously the last couple of weeks have been even more enjoyable, getting the results always help that and I’m looking forward to the rest of the season.

“The next thing I want is to grab my first goal. I’m a striker it’s what I’m there to do and it’s always frustrating when you come off the park and you’ve not managed to score, or more so when you’ve not had many opportunities in the game. It is a tight league and you will have games like that but I’m sure that the first goal isn’t far away and hopefully that will be the winner on Saturday.“

More exclusive preview interviews with Tomáš Černý, Blair Spittal and Jags gaffer, Alan Archibald are now available to Jagzone subscribers – log in now to see them. Jagzone members will also be able to watch highlights of the game from midnight.

Can’t make it to the Ibrox Stadium? Jagzone members can listen to live audio commentary of the match. JagZoneLIVE begins at 2:30pm on Saturday.