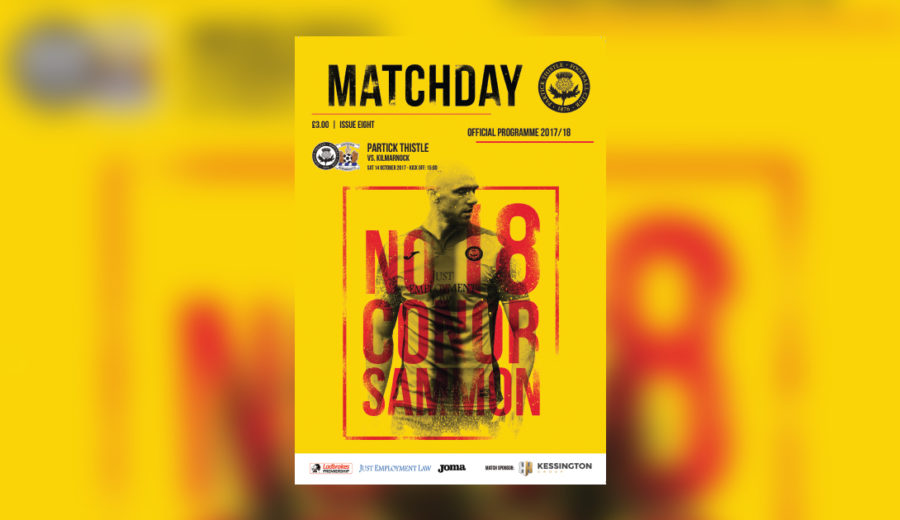 Tomorrow afternoon sees football return to the Energy Check Stadium at Firhill as Kilmarnock come to town in a crunch Ladbrokes Premiership fixture. The Jags will be looking to bounce back after a disappointing performance at Fir Park two week ago In tomorrow’s match programme, Jags striker Conor Sammon speaks exclusively to co-editor Christopher Dobie, about his career to date, starting with a slightly unusual path into professional football – a football scholarship at University College Dublin.

“I’d finished my exams at age 17 or 18. You obviously reach a stage where you have to decide what you want to do. For me that was always football. I’d been playing from a young age and I was given the opportunity to go to University College Dublin on a scholarship and play to a pretty high standard – the highest standard in the Irish league so it was a bit of a no brainer for me. It was a chance to go and progress as a player and learn a lot about the game at the same time.

“To get an opportunity at such a young age was great. That was probably the youngest squad in the Irish league at the time and that’s what you want – that opportunity to go and prove yourself at the highest level possible, against grown men in a top league.”

Read the full and exclusive interview with Conor Sammon ONLY in tomorrow’s official matchday programme which will be available for purchase from our programme sellers around the ground.

●     News from around the club over the last couple of weeks.

●     A message from the boardroom, written by Jags Chairman, David Beattie.

●     We look back at some of the Jags player who have worn the number eighteen jersey over the years.

●     Fun activities for any Junior Jags at tomorrow’s game.