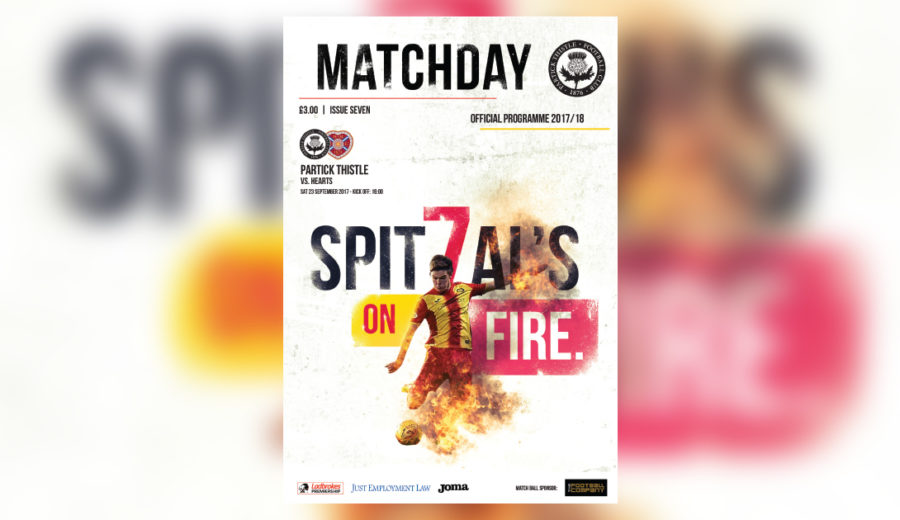 The third game in eight days to be played at the Energy Check Stadium at Firhill sees Hearts head to Maryhill to take on Alan Archibald’s side. The Jags are looking to build on two very encouraging performances against Rangers when they take on Craig Levein’s side. In tomorrow’s match programme, set piece specialist Blair Spittal speaks exclusively to co-editor Christopher Dobie, about his career starting at Hampden Park, the ease with which he settled in at the Jags and, of course, his set piece prowess.

“I’ve scored a couple over the years. The one in the Dundee derby is the one I always remember because that was the first one I ever scored – thankfully I’ve put a few more in since then though!

“It is something I work on regularly and I enjoy having that responsibility. It’s a great opportunity because it means even if you aren’t having one of your better games you will always get that chance to have an influence. I think the Friday night game against Rangers proved that. I’m not going to lie, I was having a bit of a stinker but thankfully the free kick went in, albeit via a deflection but that changed the game a wee bit and we went on to get the point.”

Read the full and exclusive interview with Blair Spittal ONLY in tomorrow’s official matchday programme which will be available for purchase from our programme sellers around the ground.

●     News from around the club over the last couple of weeks.

●     A message from the boardroom, written by Jags Managing Director, Ian Maxwell.

●     We look back at some of the Jags player who have worn the number seven jersey adorned by cover star Blair Spittal.

●     Fun activities for any Junior Jags at tomorrow’s game.