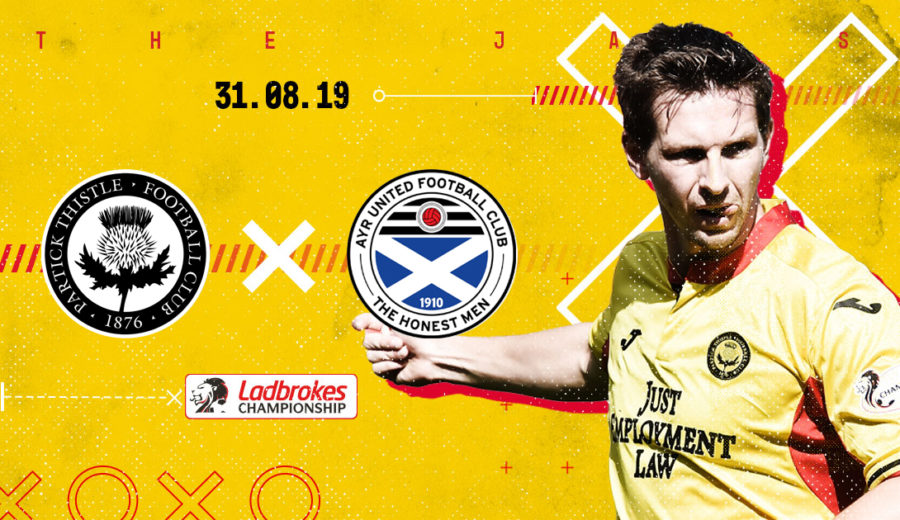 Steven Saunders was as disappointed as anybody on Friday night as Thistle gave up a two-goal lead against Morton at Cappielow but there’s no time to dwell for the number 43 as he gets ready for another tough Championship fixture against Ayr United this weekend. The performance in Greenock simply wasn’t good enough and a lot of work has been done this week to ensure that the mistakes made against the Ton are not made again. Saunders spoke to ptfc.co.uk ahead of our clash with the Honest Men:

“There has to be a reaction. We had that Glasgow Cup game on Tuesday night and I think you could see a reaction even in that game with the way we played. We need to take that forward though, Ayr are going to be a different challenge to Rangers colts with all due respect and we need to be ready to match them right from kick-off.”

The centre-half stressed the importance of finding consistency within games and not allowing the teams levels to drop as low as they did in the second half at Cappielow.

“That’s been one of the common themes for us this season; not being able to perform for a full 90 minutes. I think we saw it against Alloa, United and then Morton to a lesser extent but we need to turn in performances like the one against County more regularly.

“Even if we’re going through spells in a game where we’re struggling we have to be able to navigate those spells without conceding goals. For all we weren’t great against Morton, if we stay calm and defend properly from the 70th minute to the 80th then we more than likely walk away with a 2-0 win so we want to get better at that side of things too.”

With Ayr visiting Maryhill this weekend, Saunders is looking forward to the challenge of facing the Somerset Park side who have started the league season well.

“Any Ian McCall side is hard to play against. They’re well organised and work hard. They’ve lost a few of their big names like Shankland and the centre-half Michael Rose but they’ve found good replacements who have slotted in well and they’ll come here to win so we have to be ready for that.”

In defence, Steven is forming a partnership with Jags number six, Sean McGinty, and although they’ve still only played a handful of games together in a back four, he feels they’re building an important understanding in the middle of the Thistle backline.

“The more games you play with each other the better your relationship is and that can be a big thing in a defence. You need to have those relationships on and off the park to be an effective unit during games and that goes for the team as a whole because everyone has to contribute defensively so hopefully that’s now coming together in a way that will make us tough to beat going forward.”

More exclusive preview interviews with Alex Jones, Joe Cardle and Jags manager, Gary Caldwell, will all be available to Jagzone subscribers this afternoon – log in to see them.

Can’t make it to the Energy Check Stadium at Firhill? JagzoneLIVE will bring you coverage of the full 90 minutes through our audio commentary service which begins begins at 2:45pm so join us from then.