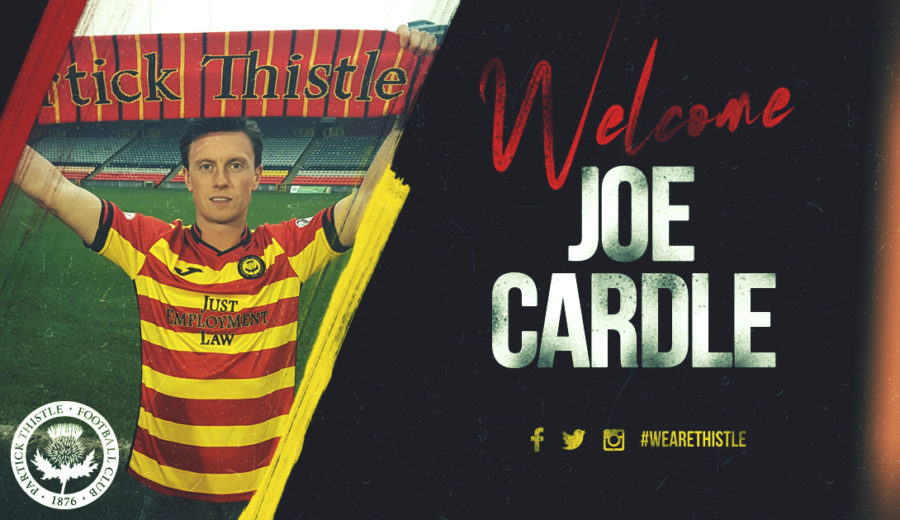 Partick Thistle can today confirm the signing of Joe Cardle on a deal until the end of the season, subject to international clearance.

The 31 year old joins the Club after having trained with Gary Caldwell’s team and signs a deal that contains an option for a further season.

The Blackpool-born wideman began his senior career with Port Vale in 2005 having joined the Valiants from Burnley. He then had short spells with Clyde and Airdrie before moving to Dunfermline in 2009, where he would really make his name.

During a near five year stint at East End Park he played over 100 times scoring 24 goals in the process before moving on to Raith Rovers. A year with the Rovers was followed by a year in Dingwall, however, in the end, he found himself back in Fife in 2015 as he re-signed with Dunfermline.

He ended three years at East End Park in the summer to join AFC Fylde where he scored twice in 17 games.

Having spent a short period training with the squad, Joe has now put pen to paper on a deal which makes him Thistle’s third signing of the week.

Joe will wear squad number 32 for the Jags.

It’s only half time in our season and there is still so much to play for. You’re part of it. 2018/19 half season tickets are on sale now – buy yours here.

Sponsorship of Joe’s kit is available to purchase online.