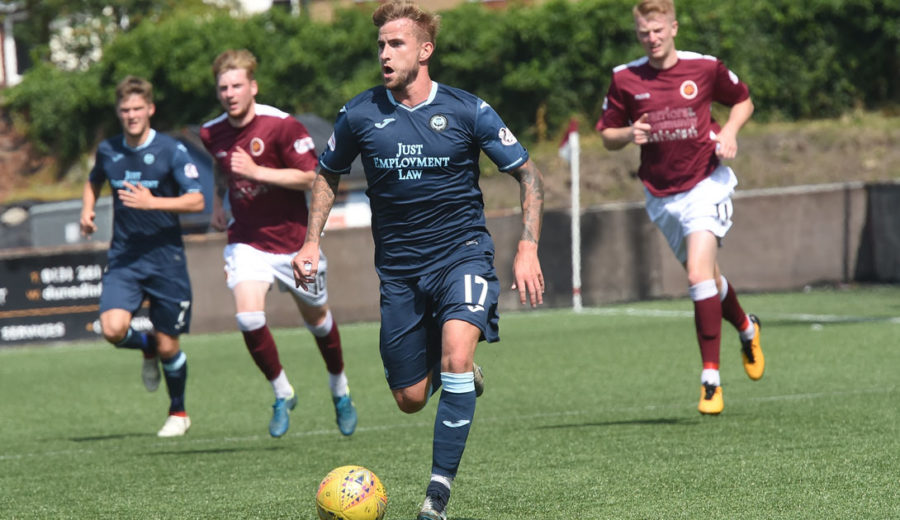 Slater delighted to get off to winning start

After a couple of weeks of pre-season with a new club, there’s only one thing on your mind; making your debut, as Craig Slater can attest to. The midfielder joined Partick Thistle on a one-year deal earlier this month and, yesterday, finally made his first competitive appearance as a Jag as the Maryhill men kicked off the 2018/19 season at Ochilview. The number 17 played the full 90 minutes and won the JagZone Man of the Match award for his efforts in the Thistle engine room. Craig spoke to ptfc.co.uk following full-time.

Slater began by detailing his delight at getting his first competitive 90 minutes under his belt straight away.

“It’s brilliant to be back out there. There’s nothing quite like competitive football and I really enjoyed the game. Obviously, we started brilliantly and could easily have scored more but there were positives from front to back which will give us encouragement moving forward.”

With both teams fired up ahead of the new season, Craig felt that the two early goals took the sting out of the game a little bit.

“It definitely slowed things down. From our point of view, we came here knowing we had to break them down and to do that so early not only once but twice means that we were able to just relax a little. We obviously don’t want to tire ourselves out ahead of Tuesday and wanted to avoid injuries so those two goals just allowed us to calm everything down.”

Later in the first half, Stenny forced their way back into the game using physicality and determination but Craig said the team knew to expect that fight from their League One opponents.

“We knew there were going to be spells where they would be causing us problems. They are a strong side with a good mix of experience and youth so we knew they wouldn’t just give up even at 2-0. We could have dealt with it better at times but on the whole, I think we can be pleased with how we counteracted their style of play.”

There were signs of good football at times during the game but Craig thinks that with players players still settling in and building fitness, results are the most important thing during the group stages.

“At the end of the day we’re here to win games. I don’t think many people would be bothered about style of play if we’re winning every week. Of course, ideally we’d have both but with the squad not quite being complete yet, getting victories is the priority and hopefully we’ll have found an identity by the time league comes round.”

While Slater enjoyed the game at Ochilview, he knows that on Tuesday night it’ll be a very different game as fellow Championship side, Greenock Morton come to Maryhill.

“We have to expect a different type of game on Tuesday. Against Stenny, it was tough, they fought well but the Morton side will have a bit more quality in it. Either way, we have to prepare well and be ready for another testing 90 minutes.”

More reaction from Shea Gordon and Jamie Sneddon as well as Jags gaffer Alan Archibald is available now to Jagzone subscribers. Log in now to see it.

Craig will be here for the next big moment – will you? 2018/19 season tickets are on sale now – buy yours here.