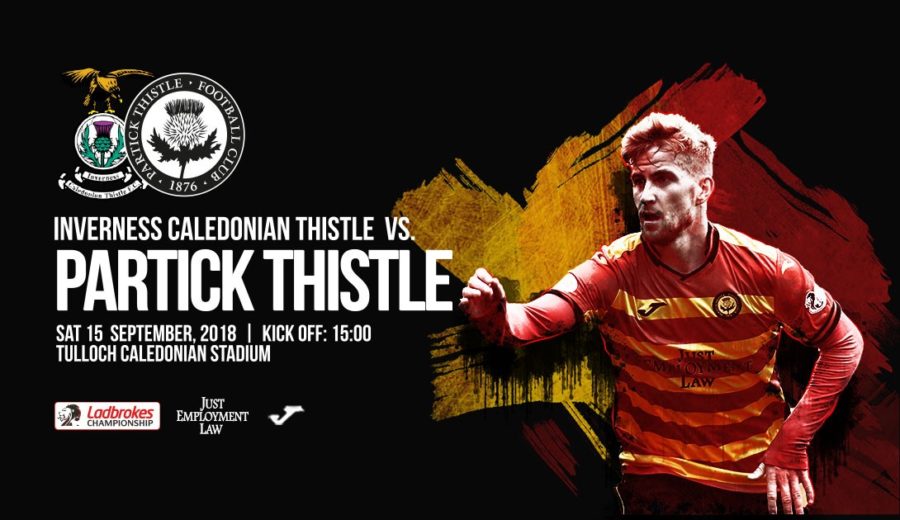 Slater: It’s going to be a very difficult match

The relentless schedule of Scottish football continues this weekend for Partick Thistle as they face another tough away trip; this time in Inverness. The Jags return to league action, looking for a first away win of the Championship campaign as they travel to the Highlands to take on John Robertson’s Caley Jags. Thistle currently sit three points off the top of the table and a win would take the Maryhill men a point above second-placed Inverness. Jags midfielder, Craig Slater spoke to ptfc.co.uk ahead of the trip to the Tulloch Caledonian Stadium.

Slater began by discussing the fixture overall, acknowledging just how tough a game this will be.

“It’s going to be a very difficult match; we all know that. There are no easy games in this league and there’s a different challenge each week so we need to be on our toes. We know last week’s game was nowhere near good enough but we’re all very keen to put things right this weekend so hopefully we can come away with the win.”

Craig said that the players understand improvements are needed after last weekend’s result but told us that training has felt really good this week and the squad can’t wait to get back out on the pitch.

“Everyone’s come back in with a positive mindset. The worst thing you can do after a disappointing loss is let it get to your head and it’s up to us to ensure that doesn’t happen. There are no illusions in the squad; everyone knows we simply weren’t good enough but after we lost to Ayr and Dundee United, we bounced back immediately and we’re looking to do the same at Inverness.”

Caley have kept three clean sheets in four Championship games so far this term and have conceded just 18 goals in 22 games this calendar year so Craig knows it’s going to take some good play to break the Caley Jags down.

“We know they’ll defend well but if we focus on ourselves and impose our style of play on the game then we’ll be giving ourselves a good chance. They’ve started the season well but so had Morton before we beat them last Saturday so we can’t show fear. Any team can beat any team in this division and it’s just about turning up for us because we can be a great team on our day.”

We then asked him about Brice Ntambwe and their budding relationship as well as how Brice’s presence changes Craig’s role.

“Brice is a very different type of player to anyone else we have here which is a good thing. He’s a sitting midfielder in the most typical sense and that gives me a bit more freedom to attack which feels more natural for me. The more options we have the better and the squad is filling up nicely with more guys coming back from injury. We’ve had Stuart Bannigan back on the pitch recently as well which is another huge boost as he’s a great player and has a big part to play.”

Slater finished by mentioning a couple of pleasant memories he has against Inverness having scored twice against the Highlanders in his time as a Killie man, including a goal at Caley’s place.

“I’ve scored a couple against them. The one at Rugby Park was a great volley from range and the one up there was free kick. I’ve always enjoyed playing them and it would obviously be brilliant to get off the mark for Thistle because I do want to provide goals from midfield which I can hopefully now do with a slightly more attacking role.”

Can’t make it to the Tulloch Caledonian Stadium? Jagzone members can listen to live audio commentary of the match. JagZoneLIVE begins at 2:45pm on Saturday.