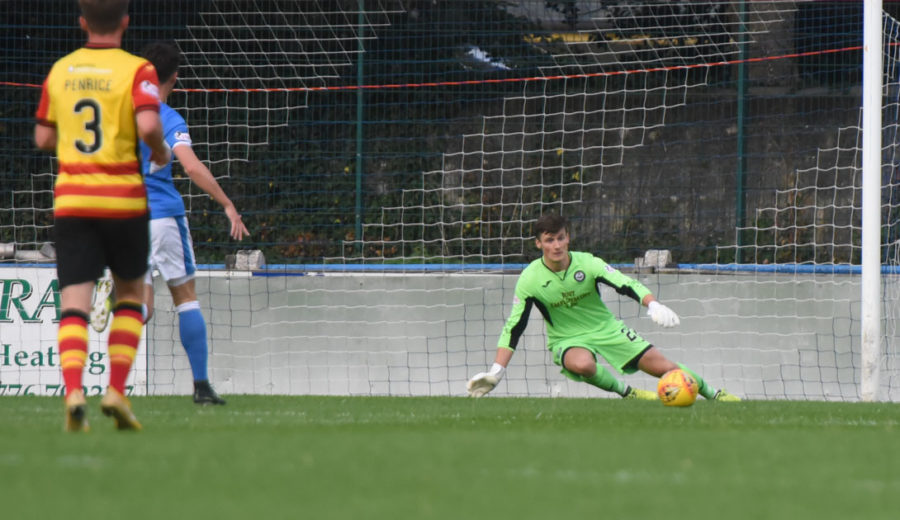 Sneddon: Good to progress to the next round

There were five changes ahead of last night’s Irn-Bru Cup tie against Stranraer with a few players getting their first Thistle starts. One such player was Jamie Sneddon who was given the opportunity in the starting XI having impressed during a substitute appearance against Stenhousemuir in mid-July. The young man stepped in admirably at Stair Park yesterday, making a great save in the ninth minute and acting as a calming influence throughout the entire match. Having finished the match with a clean sheet, Jamie spoke to ptfc.co.uk after the final whistle.

Sneddon began by praising the team’s overall performance as they saw off the challenge of Stranraer with relative ease.

“It’s great to get through, at the end of the day because that’s what we were looking to do, by whatever means. Stair Park is a tough place to come and it’s never easy against lower league teams but I think everyone can be happy with how they played.”

Having played over 30 game for Cowdenbeath, Jamie knows all about the rough nature of the lower leagues in Scotland but he felt that the team dealt with the game’s physical side very well.

“I think for the first ten minutes, it was a bit of a battle but the first goal really settled us down and from then on, we got the ball down more and outplayed Stranraer. At times, we played some really good football which you can see for the third goal in particular.”

The 20-year old told us that he’d been hungry for another chance ever since his 45 minutes at Ochilview and was very grateful to be given an opportunity to play in the Irn-Bru Cup.

“I was very pleased when the gaffer told me I was starting. I’m always ready to play when called upon and I think I did well against Stenny but I knew I wasn’t just going to be handed more games because we’ve got a great group of goalkeepers here. However, the manager showed his faith in time tonight and hopefully it’s the first of many clean sheets.”

“It’s brilliant to see that the pathway is there for the younger players. Training with the first team is great but getting out and playing first team games is the ultimate goal. The manager isn’t afraid to play us and that puts the onus on us to go out and perform. James and Callum did well in midfield and Aidan was outstanding out wide so hopefully we’ve shown the manager all of what we’re about.”

The team has played a few different formation through the opening six games and tonight Alan Archibald tweaked the shape on a couple of occasions but Jamie says as a goalkeeper, he’s more than comfortable with alterations to shape.

“Communication is key if you’re changing you’re formation mid-match. You need to be able to trust your defenders as well. Obviously, a lot come down to how the defenders adapt but making sure to talk to them can be a huge help especially just after you make the change and the guys are still settling into it.”

More reaction from Tam O’Ware as well as Jags gaffer Alan Archibald is available now to Jagzone subscribers. Log in now to see it.

Jagzone subscribers can rewatch the full game or enjoy extended highlights of our Irn-Bru Cup tie.

Jamie will be here for the next big moment – will you? 2018/19 season tickets are on sale now – buy yours here.