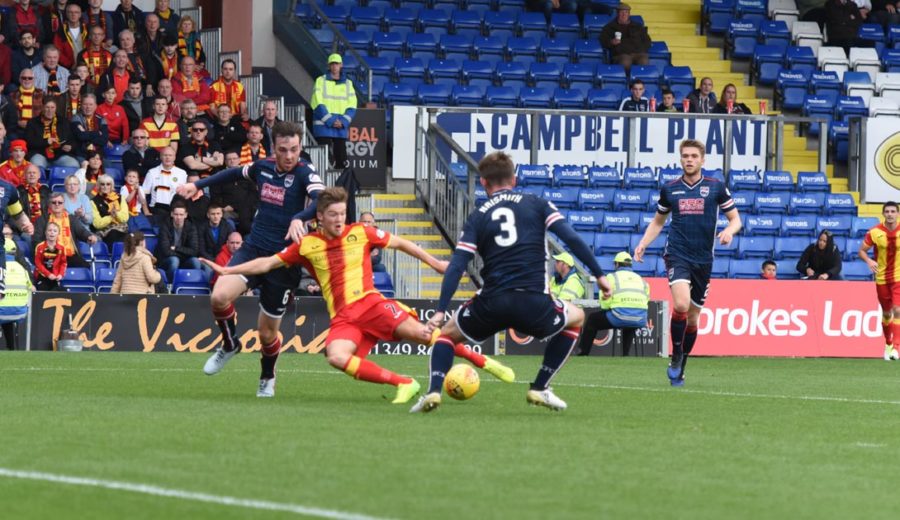 Spittal: A point was probably fair

One of the biggest factors in Partick Thistle’s struggling start in the new season has been injuries. Players like Mustapha Dumbuya and Kris Doolan have missed games but arguably the most damaging absentee had been Blair Spittal. The wideman missed Thistle first three league matches as well as the Jags’ Betfred Cup clash with St. Johnstone. In the three league games that he missed, Alan Archibald’s side scored just once losing all three. He came back into the starting line-up for the Firhill side’s clash with Aberdeen. Although Thistle went down 4-3, Blair was involved in all three Jags goals in an encouraging. He started again yesterday, netting the opener in a 1-1 draw with Ross County. The Maryhill men conceded a late penalty that denied them all three points but got their first point of the season nonetheless. We spoke to Blair following the clash in the Highlands.

Spittal admitted that he was feeling mostly disappointment after coming so close to the team’s first league win of the campaign.

“Obviously, we wanted the win desperately and aren’t content with the point but based on the play a draw is probably fair. They started very well and had a few decent opportunities but we came back into it after about 15 minutes. We managed to get the goal around 20 minutes which helped us settle in and allowed us to start playing more of our game. Second half, I thought we were decent in parts but dropped too deep as the game went on, maybe because we were so keen to get the win.”

Although the Jags let victory slip through their fingers, they did get their first point on the board thanks to the draw which is a weight off the players back having failed to take a point from their previous four league matches.

“It’s good to get the point and we’re glad to get off the mark in terms of points but in the end, we should have taken three. We wasted our possession too often and maybe if we had been better with the ball, we could have taken the win but on the balance of play, the County equaliser was deserved on their part.”

The game was a patchy one where passing play was sparse and Blair faced a different style of play to the fairly free-flowing game that was Thistle’s meeting with Aberdeen.

“I thought that we countered them well at points. We were on the back foot for a lot of the game which meant they were left a bit more open and we were trying to exploit that. We didn’t create enough when we got into the final third which was one of the reasons we didn’t extend our lead. Ultimately, we’ve got the point and we have to build on that.”

Blair netted three times in the Betfred Cup for Thistle and even grabbed two assists in the Jags last match but his goal in yesterday’s game was his first in the league this season which he was delighted to get.

“It was a good feeling to score and get my first league goal for Thistle. It was smart play by Kris Doolan with the quick throw, he spotted my run well and I managed to get in behind. To be honest, I didn’t see it hit the net because I basically slide tackled it in but it was nice to grab a goal even though I’d have liked it to be the winner.”

Spittal mentioned his link-up with Doolan and he wants to create more playing partnership with his teammates as he beds into the team again.

“Dools is great for linking up and that sort of thing. His movement is great so I enjoy playing alongside him. Hopefully I can build these sorts of understandings with all the forward players at the club and build on my goal tally.”

In the two games that Blair has been back in the starting XI, Thistle have scored four goals. In the three league matches before his return they’d struggled to find the net scoring just once in three games. The number seven has enjoyed being back in the fold and hopes to continue to contribute.

“Against Aberdeen last time out, I was involved in all the goals and two came from set pieces. That’s something that we do work on in training and it came off for us in that game. Of course I was delighted to be in amongst the action last week and it was even better to get a goal this week. My individual aim is just to score and create as much as possible this season.”

The Jags face Rangers next week and Blair knows that the side need to regroup, analyse yesterday’s game and use it as motivation for the Glasgow derby next Friday.

“We’ll look at the match during the week and reflect on the game. We have to be positive going into the Rangers clash. They’ll be heavy favourites but we have to show everyone what we’re all about by causing them problems. We play them twice in quick succession but we know we have to take each game on its own. We just have to look at the St. Johnstone games to see that you can play the same opposition but have two very different games.”

As Blair mentioned, Thistle’s next game is against Rangers this coming Friday in the league where the Jags will continue their search for a league win. Kick-off is at 19:45 from Firhill.

More reaction from Ryan Edwards and Ryan Scully as well as Jags gaffer Alan
Archibald is available now to Jagzone subscribers. Log in now to see it.