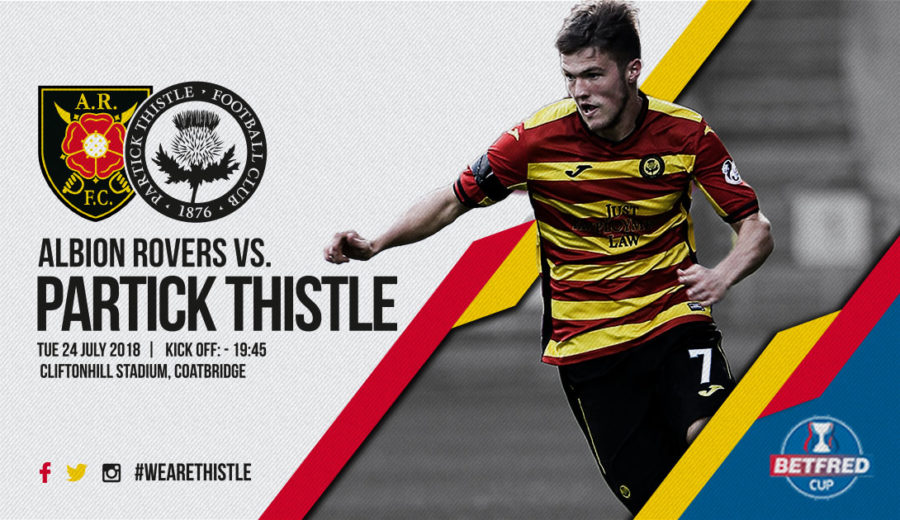 Blair Spittal is looking forward to the chance to continue Thistle’s good start to the season as we travel to Coatbridge to face Albion Rovers in the Betfred Cup.

A win would take the winning start to the season to three games and set up a game against Ayr United to find out who will top the group and guarantee progress to the next round.

Speaking to ptfc.co.uk he said: “We are looking forward to the game, it’s going to be a tough game but definitely one we can target to get all three points in.

“We have started well and want to keep that run of form going. It was important we got off to a good start in this cup and we want to carry that through to this game.”

Spittal admits the second half against Morton was disappointing but is taking positives from it.

“We were disappointed in the second half against Morton last week but the important thing was getting the three points.

“You want to win every game in style but perhaps that second half let us show a different side to our game. We had to hang on and maybe last season we would have conceded the second but it’s good to win ugly so early in the season, show our mental toughness in those situations.

Blair is one of a handful left from last season and he insists there is still relationships being formed as everyone plays together.

“It takes time for new players and new partnerships to gel but I think we’ve shown some good signs going forward in these games. We’ve created some good chances and scored some good goals and it’s a positive sign for the season ahead.

“We have a good base of the squad, obviously the gaffer will be looking to bring in others but we are gelling well so far and building a good team spirit.”

The Jags number seven has visited Cliftonhill before and knows a professional performance is required.

“I’ve played at their place before and it’s a tough place to go, it’s maybe not the best of surfaces and what we are used to but we can’t use that as an excuse we have to go and be professional, we have to do things properly and make sure we do what we need to do.”

Can’t make it to Cliftonhilll? Jagzone members can listen to live audio commentary of the match. JagZoneLIVE begins at 7:30pm on Tuesday.