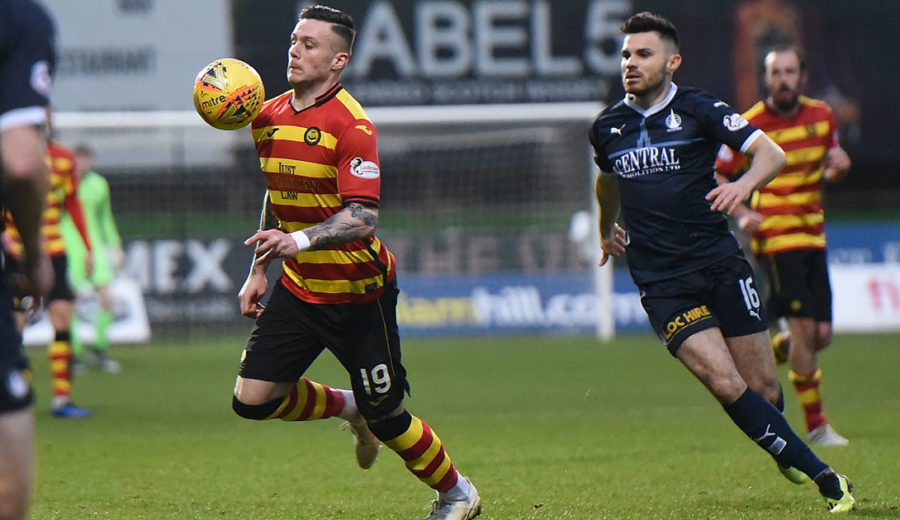 Storey disappointed with another draw

Miles Storey was disappointed to yet again come away with only a point in another game he feels Thistle should have won.

The striker was left to rue another 1-1 draw despite the Jags going ahead through Blair Spittal with Falkirk levelling things after a controversial red card.

Speaking to ptfc.co.uk he said: “ We’re disappointed not to have taken the win. It’s the exact same situation as last week. We come away with only a point thinking we should have won the game.

“Even the two games before that we feel we were the better team and should have taken more from the games.

“However, we know that doesn’t mean anything, we need to pick up the points and it’s another missed opportunity for us.

“We’ve stopped losing which is something but draws don’t really make much of a difference, especially when others are winning and putting more points between us and them.”

Storey felt the red card to Gary Harkins was the changing point in the game.

“There is no denying the sending off has had a massive impact in the game, we were in control at that point, we had the goal and were looking to go and build on that and it’s been a massive swing in momentum for the game.

“It feels like we’ve lost the game, it felt like that last week too and I’m sick of coming out after a game and feeling like that. We don’t want to continue feeling like that, we have to pick up points otherwise we will be in deep trouble.”

Falkirk put a lot of bodies behind the ball and while Miles admits it’s tough to play against, he knows Thistle have to do more to combat it.

“It was tough to break Falkirk down, they were putting a lot of men behind the ball and just looking to stifle us playing, they were just trying to stay in the game and hit us on the break. It’s hard when teams do that but we need to do better in breaking them down and taking chances when we are on top.”

Next week sees a break from league action with it being Scottish Cup weekend and the striker is looking forward to something different.

“We have a cup game next week which is a good escape from the league but as soon as that is done we have to work hard again for the next league game. It’s a home game, against someone we’ve beaten before so we have to go out and make sure we progress in the Cup. After that we can focus on Queen of the South and look to take all three points in that game.”

“I’m enjoying playing up top. I’m learning a lot from Dools, I feel like I need to learn more from players around me. I turned 25 a couple of weeks ago and I need to start learning more.  I need to start scoring goals, I know I need to do that. I am working hard and chasing everything and I feel me and Dools work well together as a two but I know scoring is the most important thing and that is what will lead to winning games.”

More reaction from Conor Hazard and Blair Spittal as well as Jags gaffer Gary Caldwell is now available to Jagzone subscribers. Log in to see it.

Jagzone subscribers can rewatch the full game or view extended highlights of our Ladbrokes Championship fixture.