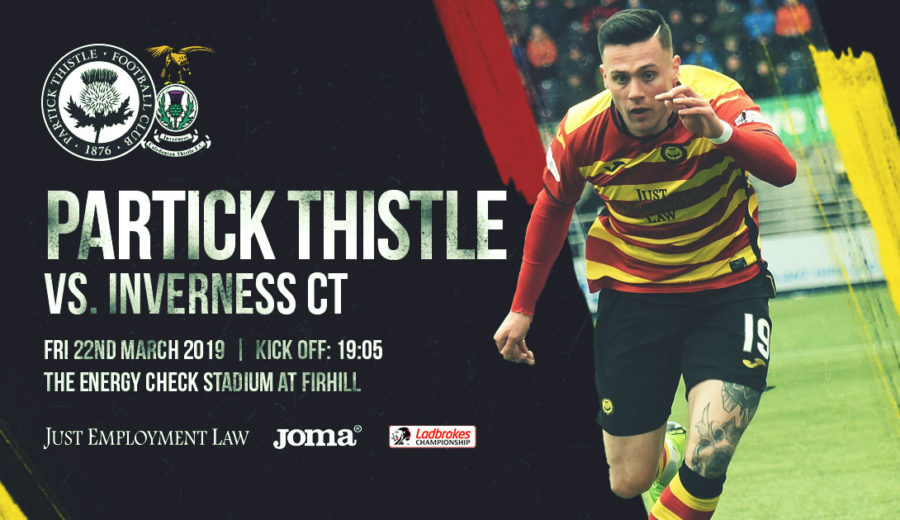 Miles Storey is looking forward to the latest episode of Friday Night Lights as Thistle take on Inverness under the Energy Check Stadium at Firhill floodlights. It’s another important match for Thistle, with a win enough to take The Jags up to 7th in the table and it’s one Miles it looking forward to

Speaking to ptfc.co.uk he said: “Friday night games are a fantastic experience. Under the floodlights, at home and there always seems to be that little bit extra buzz about it. Personally, I really enjoy them, they are always good games and I’m looking forward to Friday night. it’s on TV too which always adds something to the occasion as well.”

The forward is expecting a tough game but it’s one he feels the team go into with a genuine level of belief that has perhaps been missing at times this season.

“We know Inverness are a tough team to play against, they play some good football, they pass the ball well but it’s a game we go into believing we can win and one we look forward to.

“We know what a win will do in terms of the league. We were all disappointed last week not to get all three points that would have moved us up the table but we have another chance this week to get ourselves out of those bottom two places. “

Thistle defeated Inverness 2-1 earlier in the year at the Tulloch Caledonian Stadium and Storey is hoping for a similar result with the backing of the home support.

“We put in a very good performance last time against Inverness at their place. They have changed shape slightly and we have watched the videos this week on how we need to play. We are well prepared and ready to go out and try to replicate the result and performance – both of which were very good..

“Our home form has been good since the turn of the year, we got a great result against Dundee United last time out at home and we want to build on that, the fans will get right behind us again and we want to use that to our advantage. We need to keep putting points on the board. Everyone seems to be picking up points so we need to keep going and we know it’s all in our hands to get ourselves up the table.”

Miles enjoyed a successful spell at the highland club and he hopes for an enjoyable night against his former team and, in particular against some familiar faces.

The striker knows he needs to add some more goals to his game but first he looks to get himself back in the team after an injury forced him to miss a couple of games.

“I had a bit of an injury which kept me out for a few weeks and I’ve not quite got myself back into the team as much as I would have liked since then but that’s a sign of good performances and decent results so I can’t complain. I’ve got to be patient, the front players have been playing really well so it’s tough but when I get a chance I’ve got to take it.

“I know I need to add more goals to my game, I need to get in better positions and make better decisions sometimes. I feel like I have added to the team, especially since the turn of the year. We all work hard for each other, for the manager and for the fans, if we keep doing that then I’m confident we will get to where we need to be.”