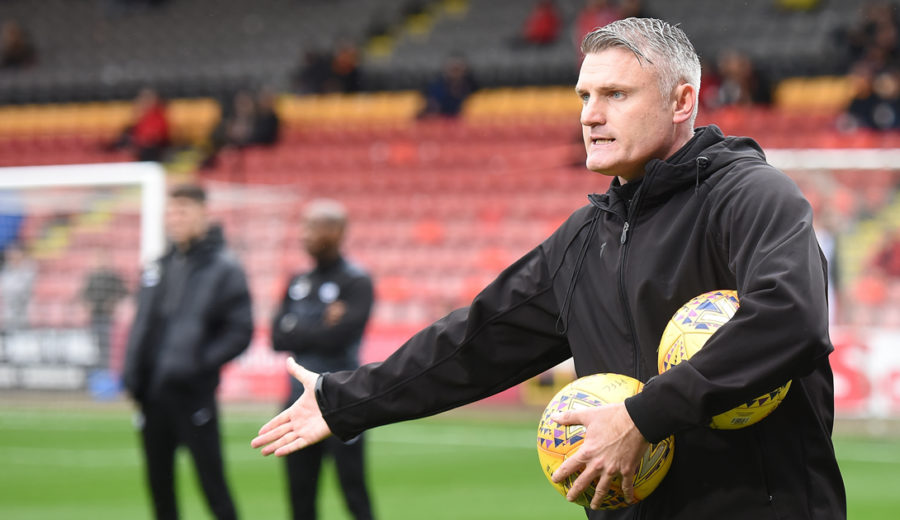 As players and staff across the Thistle Weir Academy get back up to full speed Academy Director, Scott Allison, spoke to ptfc.co.uk to provide an update on the plans for the year ahead. Scott also talked through a few changes to the coaching programme and staff at the Academy as the start of the 2019 season approaches.

Scott said: “For the 2019 youth programme I believe we have assembled a staff team with a really good mix of playing and coaching experience. That combination will prove invaluable to the development of our young players. Achieving that mix in expertise is particularly important for developing well rounded players.

“Our overall objective is to develop every individual within the groups. We will be introducing a new way of coaching this year and I have asked all staff to really focus on individual development to challenge our young players at every opportunity and accelerate their development.

“Every player in the Academy now has an individual learning plan with goals and objectives set by the players and the staff collectively. I am keen to see our young players take more responsibility for certain aspects of their development and we are keen to see younger players play up against older opponents as often as possible to take them out of their comfort zone.

“With younger players playing up through the age groups the team results will be inconsistent, but younger players playing against older players is the best way for kids to develop.  We did this with Aidan Fitzpatrick throughout his development journey at the Academy and all the evidence suggests the types of methods we use can work on an individual level.

“I want to see more teenagers break into the first team like Aidan, ultimately it’s up to the players to take the opportunities we provide and Aidan is a good example of someone who has done this.

“At every age group we now have a great mix of coaching and playing experience on the staff team. We have current and former professional players, experienced youth development professionals and qualified academics to support player education at every level. The dynamic we have created is a staff team across the Academy with a collective knowledge and experience that will really improve the learning environment. It means our players will receive the best advice from our fully qualified, experienced team to prepare them for the professional game.”

As the season begins in earnest there will be some familiar faces taking sessions at Lochinch.

“At U18 level we have Ryan McCann and Kris Doolan working with the team, both of whom have a wealth of playing experience as well as holding UEFA level coaching qualifications. Furthermore, Nindy Sondh will continue as our goalkeeping coach having recently completed his UEFA B Licence. Ryan and Kris will also prepare the best players at this age for integration at reserve level to ensure the Academy and club pathways link well at this important stage for development.”

The aforementioned Kris Doolan made his first steps into coaching last season and has been a valuable asset as part of the Academy in recent months. Along similar lines, Scott was delighted to announce that another first team star would also be making his first steps towards a coaching career as a Thistle Weir Academy coach.

“Tam O’Ware will join former Stirling Albion boss and UEFA ‘A’ Licensed coach, Greig McDonald, to coach the under 16s which is great news for us. Tam holds the UEFA ‘B’ licence and has plenty of youth coaching experience already under his belt so will be a great addition to the team.

“We have a small group of players at U17 level who are mentored by former thistle defender Willie Kinniburgh. At every age group of the Academy we now have a great mix of UEFA or SFA qualified staff, as well as current or former professional players, working with our youngsters.”

Allison also outlined changes to the support staff with new appointments helping the Academy improve away from just the traditional pitch-based training sessions.

“We’re delighted to welcome Ross Maitland to the academy on a full time basis as Head of Sport Science and Medicine. Ross has prior experience with Thistle and will work closely with the medical and sport science staff at all levels of the Academy to ensure every player we work with has a physical development programme as part of their individual development plans to improve their football performance.

“Ross has been working at first team level with Clyde and I’d like to thank Danny Lennon for his understanding in allowing Ross to take up this key role at the Academy at this important stage of the senior football season.”

With a full complement of skilled staff now in place Scott is confident that the year ahead will be a successful and productive one for the Thistle Weir Youth Academy.

“We now have some real talent developing at the Academy at all age levels.  We will continue to encourage an attacking, attractive style of football across all squads and we have a fantastic staff team in place to lead this. With the emergence of teenagers like Aidan Fitzpatrick in the first team it shows our academy is now capable of producing players who can have a real impact in the professional game form a young age. The challenge for all our young players in 2019 now is to follow in Aidan’s footsteps and show they too are capable of breaking through.”