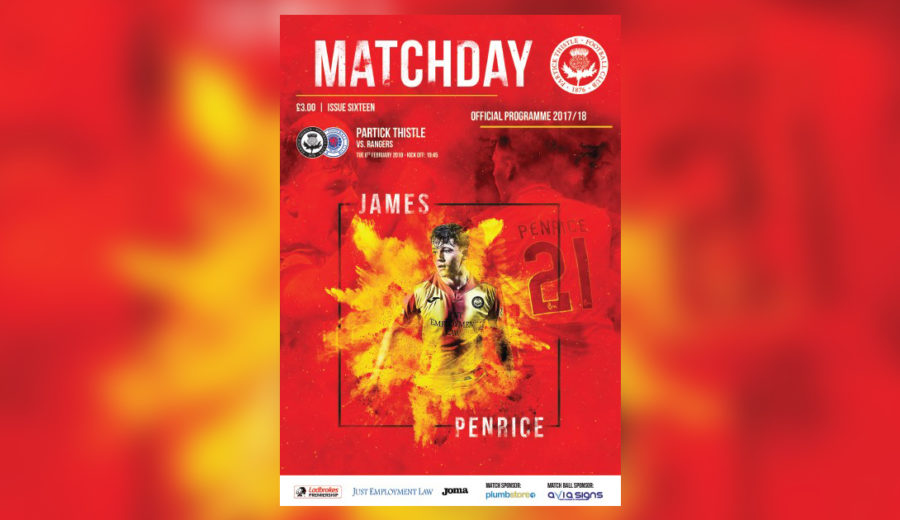 Tomorrow evening’s match against Rangers brings another game under the Maryhill floodlights with Thistle looking to maintain a good start to 2018. In tomorrow night’s match programme co-editor, Christopher Dobie, spoke to Jags youngster James Penrice about his aspirations for the second half of the season as he looks to use the experience he gained on loan at Livingston to establish himself as a first team regular.

“I want to become a first team player here. That’s the aim that’s in front of me at the moment. I’ve had tastes of the first team but I want to be consistently in that team and I know it won’t be easy. Just now, I’m one of three left backs here if you include Christie and both him and Callum Booth are quality players but that just means I’ll have to push that bit harder to make the jersey my own and I’m willing to go for it. The gaffer isn’t afraid to give the younger boys a chance as we saw against Celtic when both me and Andy McCarthy started so I know I’ll get some opportunities and it’s up to me to make the most of my time on the pitch and give the gaffer a reason to pick me again. It’s all about working towards becoming a first teamer and I know it won’t be easy.”

Read the full and exclusive interview with James Penrice ONLY in tomorrow’s official matchday programme which will be available for purchase from our programme sellers around the ground.

Also inside this week’s issue, priced at just £3: