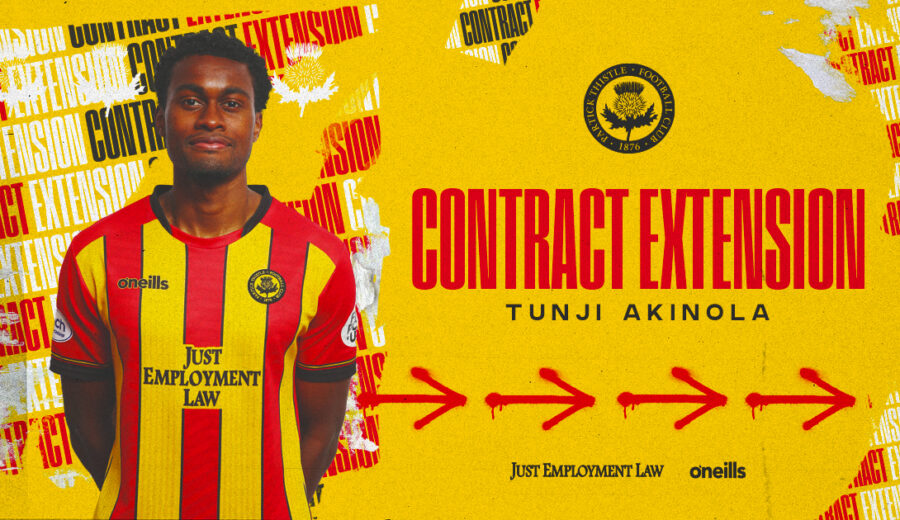 Partick Thistle can today announce that Tunji Akinola has signed a contract extension with the club which will keep him at Firhill until the end of the 2022/23 season.

The central defender joined the club back in August on a one-year deal, making his debut as a substitute against Arbroath at Gayfield Park.

He would go on to make his first start as a Jag against Greenock Morton at Firhill, putting in a Man of the Match display as the Maryhill men kept a clean sheet and won – a sign of things to come with the Englishman in the team.

When selected at centre-half, Tunji has started 15 games for Thistle keeping clean sheets in 12 of them and conceding a total of just five goals.

His performances were officially recognised when he won the McCrea FS Player of the Month award for September having scored his first goal for the club that month against Stranraer in the SPFL Trust Trophy.

The former West Ham man’s proactive defending and battling spirit have made him a favourite with the Thistle faithful who have been singing his name loudly ever since that standout display against Morton at the end of August.

“It’s no secret that I’ve been looking to get Tunji on an extended deal and I’m delighted that we’ve reached an agreement. It’s clear for everyone to see that he’s a fantastic defender and has been a vital part of our run of clean sheets as of late.

“At 23, he’s still got a lot to learn but he’s got all the attributes he needs to become a top centre-half. He already reads the game well and he’s got the combination of pace and strength which makes it very difficult to get past him. We’re delighted he’ll be at Firhill for another season.”

An exclusive interview with Tunji discussing his contract extension is now available to JagZone subscribers.