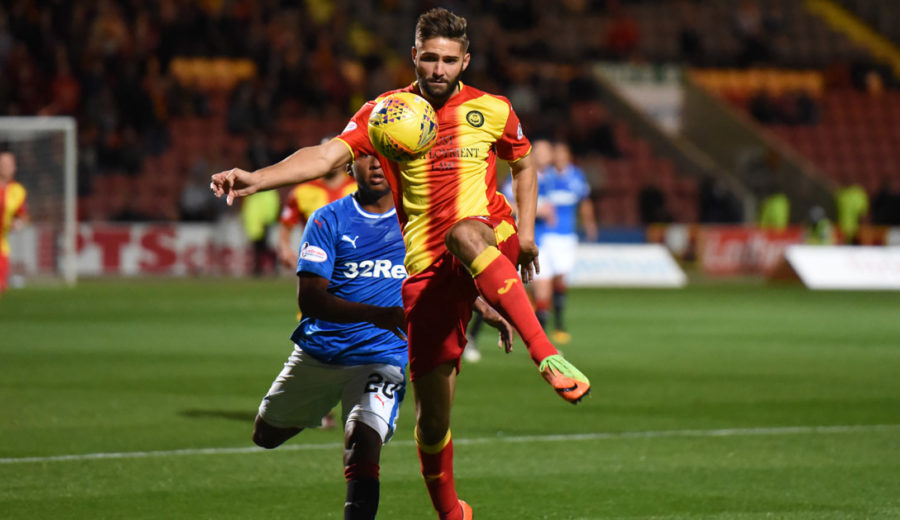 Turnbull: It was a crazy second half

Since making Partick Thistle his debut against St. Johnstone in the Betfred Cup, English centre-half, Jordan Turnbull, has been a mainstay in the Jags’ rear-guard. He’s played alongside Niall Keown and Daniel Devine and has been equally impressive with either partner. He has put in a number of solid performances including a man of the match showing in Thistle’s narrow defeat by Celtic. Tonight, for the first time this season, the Jags played with three centre-halves and Jordan started as the leftmost of the three. The team battled hard and although they had their backs against the wall for over ten minutes in the latter stages, they came away with a point against their city rivals, Rangers. Jordan spoke to ptfc.co.uk after the game to reflect on the evening’s match.

Firstly, Turnbull reflected on what was a hectic second half for both teams, with Thistle equalising and going ahead before having a man sent off then Rangers drawing level and pushing for a late winner that didn’t come.

“It was a crazy 45 minutes. The red card was probably the game changer. After the sending off it was extremely difficult for us but these things happen in football. We wanted to hang onto the three points but they grab a brilliant equaliser and suddenly we’re right up against it. When we look back, there will be plenty of positives to take and it’s a really good point to be honest.”

Jordan was happy with the point but knows that the boys will feel disappointed that they couldn’t hold out for a win.

“As I said, we wanted the three points but when you’re down to ten men against a team with the attacking power of Rangers, it’s inevitable that they’ll create chances and unfortunately for us they managed to take one. They had a lot of the ball but we defended well so, in the end, deserved a point. In all honesty, a draw is a good result. We saw what they can do when they beat Dundee 4-1 and it’s a testament to us that we kept them out in the last ten minutes.”

Late on, the Gers began desperately launching crosses into the box as they searched for a winner This allowed Jordan, Daniel Devine and Niall Keown to defend in the air which Turnbull feels played into Thistle’s favour.

“We had plenty of bodies in the box in the last few minutes but we were happy for them to hit long balls forward as we fancied ourselves aerially. Our communication was good too and all of the boys gave their all.”

Thistle fell behind just 17 minutes into the first half and Rangers put plenty of pressure on the Jags’ box in the opening 45. Jordan stressed the importance of getting to the interval, still in the game.

“It was crucial that we were still in with a chance by the time half time arrived. When you go into the break two or three down, it can be very difficult to motivate yourself for the second 45 but when you’re within touching distance of the opposition, you always feel you have a chance to get back into and that’s what we did in the end, getting level very quickly in the second half.”

For the first time this season, Tomas Cerny didn’t start in goals for Thistle. Although this was a huge blow for the Jags, Jordan feels just as confident with Ryan Scully in goals as he does when the Czech, Cerny is.

“Ryan came in against County and did a great job, pulling off a couple of great saves. Today, he started and did his job well. He was communicating with his defenders and was quick to claim loose balls in the box so it’s great to have a back-up ‘keeper of such quality.”

The Jags found themselves in a similar position to the last two Thistle-Rangers games at home, with the Gers pushing for a late winner. Jordan wasn’t at the club when the side suffered two late defeats to the Govan side and he was able to cast those games out of his mind as he battled for the draw.

“When you’re in that situation it would be easy to start thinking about those occasions. Obviously, I wasn’t at the club for those games so it was easy for me to focus on the task at hand although I understand that some of the other boys might have found it hard to forget. We’ve conceded a couple of late goals already this season so, from my point of view and the team’s, it was important for us to close out the game professionally and that’s what we did.”

Jordan and the lads now turn their attentions to Tuesday’s Betfred cup semi-final as they go in for round two against Rangers. Kick-off is 19:45 at the Energy Check Stadium at Firhill.

More reaction from Paul McGinn as well as Jags gaffer Alan
Archibald is available now to Jagzone subscribers. Log in now to see it.