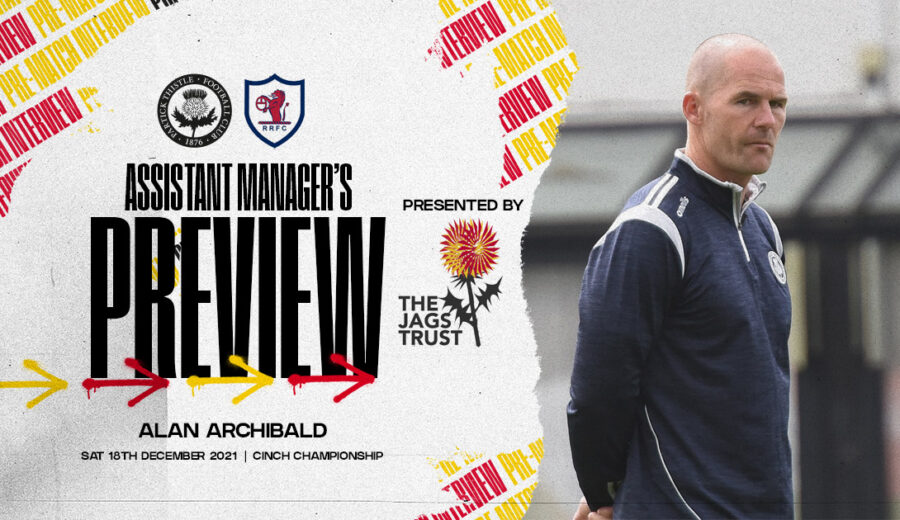 Partick Thistle’s nine-game unbeaten run was ended last weekend as Arbroath defeated the Jags 2-0 at Firhill and now Ian McCall’s side look to bounce back as Raith Rovers visit Glasgow. The Kirkcaldy side are in the midst of a terrific run of their own having gone 15 games without losing, the first result of which was a 3-2 win over Thistle. However, the Maryhill men will be looking to end that streak and bring themselves to within two points of their Fife adversaries. Thistle assistant manager Alan Archibald spoke to ptfc.co.uk ahead of the match:

“It’s a chance for us to bounce back after a really disappointing game last week where we didn’t perform to our best. After such a good run, you’ve set a standard that you need to go and meet and we didn’t do that at all last week so we just have to try to get back on track this weekend.”

Looking back on the loss to Arbroath further Archie said the Red Lichties were deserved winners despite a bright start from Thistle.

“I actually thought we were doing alright for the first 20 or 30 minutes but after that they started to control things and dictate the pace. At that point we were looking to battle back into it but at the end of the day we didn’t do enough in the game to warrant a point even.

“They had their chances from open play and we probably got away with it a couple of times but they then score two from set pieces and you’re thinking if we could have just defended the set plays properly then we might have got a point without playing well. That’s all irrelevant now though and we’re preparing for another difficult game.”

After the frustration of Saturday, Archie says the squad have come back in for training determined to put things right against Raith.

“They knew on Saturday that they weren’t good enough. I think that’s one of the best things about the team we’ve got at the moment; they all demand a lot of themselves and each other and they also know when they’ve fallen short of expectations.

“We weren’t getting too carried away when we were on our unbeaten run and we’re also not getting too down now that we’ve lost a game. We’ve got back to training and back to working extremely hard as we always do to make sure we’re in the best possible position come kick-off on Saturday.”

Raith were 3-2 winners the last time they played Thistle and Archie says the Jags are going to have to be at their best to get a result against them this time round.

“They’re recent record speaks for itself really. I think they’ve only lost two league games all season and they’ve done that by playing good football too. They move the ball really quickly and we saw how incisive they can be when we played them in September.

“That game was a bit of a strange one because we felt like we were very much in it throughout but we found ourselves 3-0 down in the second half. At that point we were still struggling a bit defensively and that’s one area where we’ll hopefully be able to deal with them a bit better this time.

“Keeping the game tight is always important. Even if you’re not at your best in attack, if you can stay solid defensively then you’re always one moment away from a point or a win so hopefully this time round we can make sure the game doesn’t get away from us in the way it did at their place.”

Archie finished by giving us the latest team news ahead of our clash with the Rovers at Firhill.

“We’ve got a couple of doubts but we’re hopeful they’ll make it. Cammy Smith obviously came off injured last Saturday but he’s trained this week which is good. Also, Steven Bell got 90 minutes in the Glasgow Cup in midweek which means he’s getting closer to a return.”

Exclusive video interviews with Richard Foster and Thistle assistant manager Alan Archibald will be available for JagZone subscribers to watch today – log in to view.