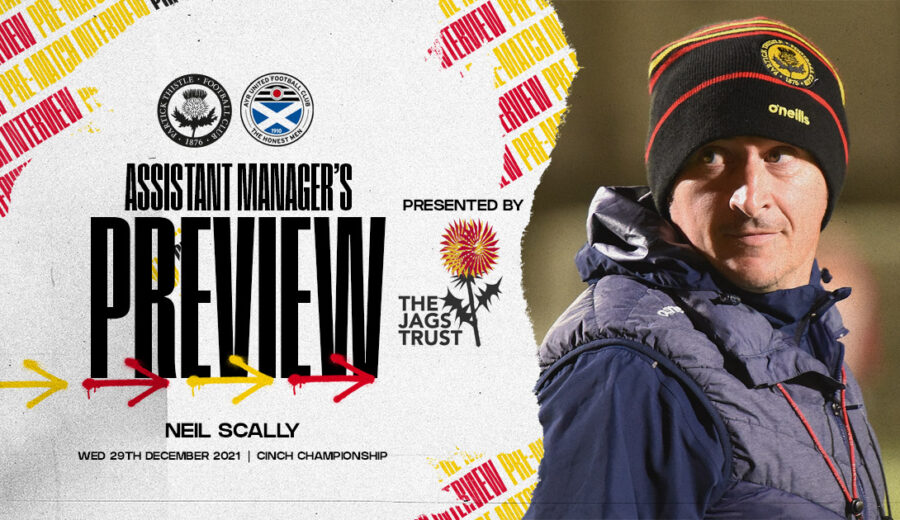 It’s midweek action at Firhill for Partick Thistle as they return to action for the first time since Christmas against Ayr United. The Jags were due to face Inverness on Boxing Day but that game was called off due to a coronavirus outbreak in the Caley squad. Ayr United, on the other hand, did play on Boxing Day as they earned an impressive 2-0 win over Raith Rovers under the charge of interim boss Davie White. That was their first win in nine league games and the Honest Men will be hoping to build on that as they visit Maryhill, where they were beaten 4-0 earlier in the season. Thistle assistant manager Neil Scally spoke to ptfc.co.uk ahead of the fixture:

“I think everyone is looking forward to playing again. The last game was that win over Raith which was a great result and when you win a game like that you just want to get on to the next one. Unfortunately, the game on Boxing Day was called off but it did mean we were able to give the players Christmas Day off to spend with their families so they’ve come back in refreshed and in good spirits and looking forward to the Ayr game.”

Looking back more on the victory against Raith Rovers, Scally said there were a lot of pleasing aspects of that game beyond just the result.

“Obviously, the points were the most important thing and for a while it looked like we were maybe going to draw so to get that last-minute winner was a terrific feeling but I thought our performance was deserving of the win.

“The pattern of the game was pretty much all one way and on a different day we might have made it quite comfortable when you think of the chances we created. Despite that, it went right down to the wire and it was credit to the attitude of the team that they didn’t give up and kept pushing for the winner.”

Now the Maryhill men prepare to take on Ayr United and, although the Jags have two 4-0 wins over the Somerset Park side already this season, Neil is expecting a more difficult game this time round.

“I went to see them play against Raith on Boxing Day and they were very impressive. They won 2-0 but it could have been more than that easily so they should take a lot of confidence from that. They’ve got an interim manager and they’ve changed a few things which seemed to work against Raith so it’ll be a real test.”

With things still very tight at the top of the table Neil says the team need to make sure they continue picking up points over the next few weeks.

“That was one of the frustrating things about not being able to play on Boxing Day; other teams were out playing with the chance to get points up on us. Arbroath and Killie went out and got wins so that just makes it more important for us to keep picking up points. We’ve got two big home games in a matter of four days and we want to make the most of these matches.”

To finish, Scally gave us the latest team news ahead of the game against Ayr.

“The long-term absentees are the same with Darren Brownlie out and Steven Bell still not quite ready yet. There are a few other knocks here and there as is often the case at this time of the season but we’ll give them as much time as possible before ruling them out.”

Exclusive video interviews with Thistle assistant manager Neil Scally and Stuart Bannigan will be available for JagZone subscribers to watch today – log in to view.

Due to new restrictions on outdoor events, tickets for our game against Ayr United have been balloted for season ticket holders. Click here for the latest update on the ballot.