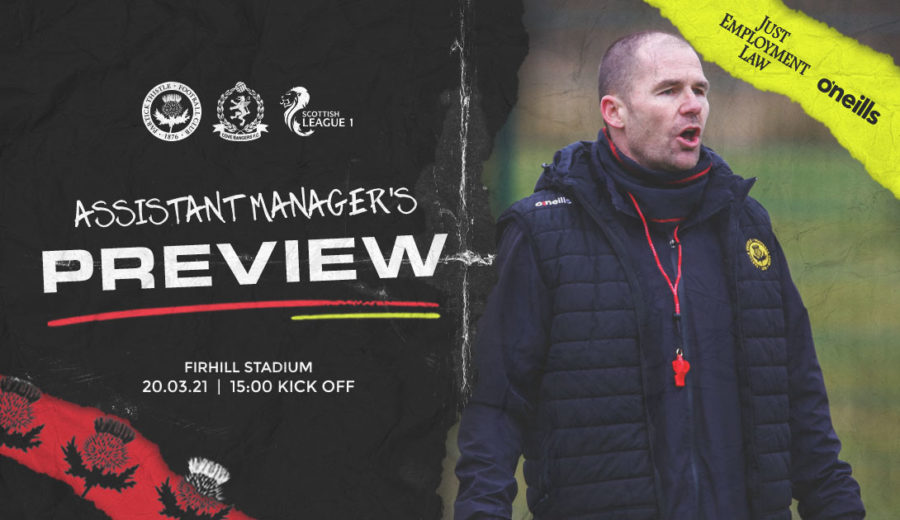 Competitive football returns to Firhill this weekend as Partick Thistle welcome Cove Rangers to Glasgow for League One action. The Jags haven’t played since Boxing Day when they drew 0-0 with Falkirk and restart their campaign against Paul Hartley’s Cove side. Thistle assistant manager Alan Archibald spoke to ptfc.co.uk ahead of the game:

“It’s a bit surreal to be honest. It feels like a new season to an extent and that’s been really strange after so much time off and we’ve even had a bit of sun these past few days which makes it feel like summer but we’re all really excited to be back.”

The league season has been shortened again to 18 games with the potential of a split thereafter and Alan says that does make it a bit tougher to plan ahead.

“We’ve not looked at these games in any sort of blocks because it is going to be just an intense period of game after game after game. We’ve been trying to plan the training as best we can to make sure everyone stays fit and available because when you consider they’ve only had a couple of weeks of training after coming back, we have to be careful with how much we give them away from the games.

“That balance has been difficult to hit because we know we need to get them up to speed in a very short space of time but we also don’t want to overwork them going into such a packed schedule. And on top of that, the amount of training they need to do will depend on whether or not they play so we might have 13 or 14 players who don’t need to train as much but then 10 who need topped up after a Saturday so that they’re all ready for a Tuesday.

“Also, all of our guys have a good understanding of how to look after themselves so if they aren’t here training we can trust them to stay in match shape. The experience of these two lockdowns probably helps that to be honest because they’ve needed to stay in shape for long periods of time without training.”

Our visitors Cove Rangers are sitting in second place at the moment and Archibald is expecting a very competitive game.

“I think the last live game I went and watched before the suspension was Cove playing away at Alloa and they came from behind to win playing very well. The last time we played them in October feels like a lifetime ago now and it wasn’t much of a game but they try to play football when possible and that’s what they did when I saw them against Alloa so we know it’ll be a very tough game.”

Alan concluded by giving us the latest news as far as team news is concerned for this week’s match.

“It’s pretty similar to last week. Ross Docherty, Tam O’Ware and Blair Lyons are all still out and Ryan Williamson is unavailable even though he has been back training. He could have just made the bench but we felt that since he’s only had a couple of days back with the group that he would be better served by doing some individual training on matchday.”

More exclusive preview interviews with Alan Archibald and Shea Gordon will be available for JagZone subscribers to watch today – log in to view.

JagZone subscribers will be able to tune in to live audio commentary for this weekend’s clash with Cove Rangers – click here to tune in.

We’ll have extended highlights and a full game replay of our clash with Cove on JagZone this Saturday evening.