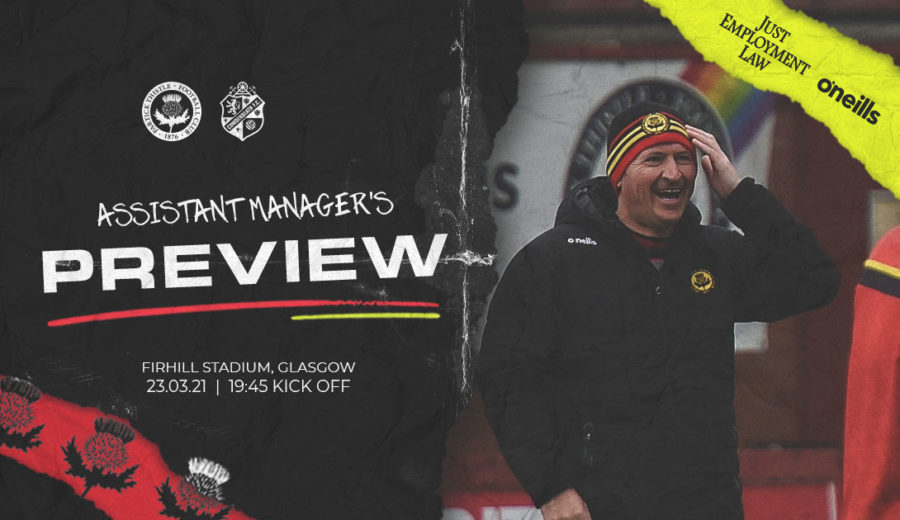 Partick Thistle’s Scottish Cup campaign begins this evening as the Jags welcome Cowdenbeath to Firhill for a delayed second round tie. Ian McCall’s side returned to competitive action at the weekend with a 1-1 draw against Cove Rangers and now look to secure their first win of the restart against the Blue Brazil who also drew in their first game back; a goalless contest against Annan Athletic. Jags assistant manager Neil Scally spoke to ptfc.co.uk to give his thoughts ahead of the game:

“The boys are really happy to just be back at the moment so we’re looking forward to every game no matter how quickly they come. We didn’t get the result we were looking for on Saturday but we’ve got a chance here to go and get a win to get us on the right path as we make our way through this packed schedule.”

Following our draw with Cove on Saturday, Scally was left lamenting the same issue we’ve been dealing with all season, an inability to put teams away while we’re on top.

“It’s something we’ve been talking about since the very start of the season it feels like and there have been too may examples of it. Games where we have good spells and create some decent chances but more often than not we don’t take them and it comes back to bite us.

“At 1-0, we felt in control and with about 10 minutes to go Mouhamed Niang has that chance which if he finishes probably finishes the game in all honesty but again we don’t kill them off and they score a well-taken goal but when you have those kinds of opportunities you need to take advantage.”

Coming out of a two-month break from training requires a balancing act to ensure everyone in the squad is match fit and Neil says that makes for some tough decisions in team selection with games coming thick and fast.

“That’s one of the things that we have to constantly monitor as a management team. We need to look at which players are playing loads of minutes and maybe need a rest and also who hasn’t played as much and could really do with some game time because at the end of the day we want all these guys to be ready to play a part either as a starter or off the bench and if they’ve only trained then they might not be sharp enough to play that part.”

Scally ended by giving us the latest team news ahead of the cup game.

“Andy Geggan, Steven Bell and Chris Erskine are all cup-tied for this one which is a shame because we’d have liked to get them some minutes. For the injured guys who missed out on Saturday it’ll come too soon for them except maybe for Ryan Williamson who has been back for a few days of training now.

“Also, Zak Rudden is back after serving that suspension at the weekend so we’re delighted to have him back because he’s looked very sharp and enthusiastic in training. We’re really excited by the prospect of Zak getting a run of games under his belt.”

More exclusive preview interviews with Neil Scally and Zak Rudden will be available for JagZone subscribers to watch today – log in to view.

JagZone subscribers will be able to tune in to live audio commentary for tonight’s clash with Cowdenbeath – click here to tune in.

Anyone who wishes to watch our livestream of the game must buy a pay-per-view pass, priced at £10 – click here for more info.