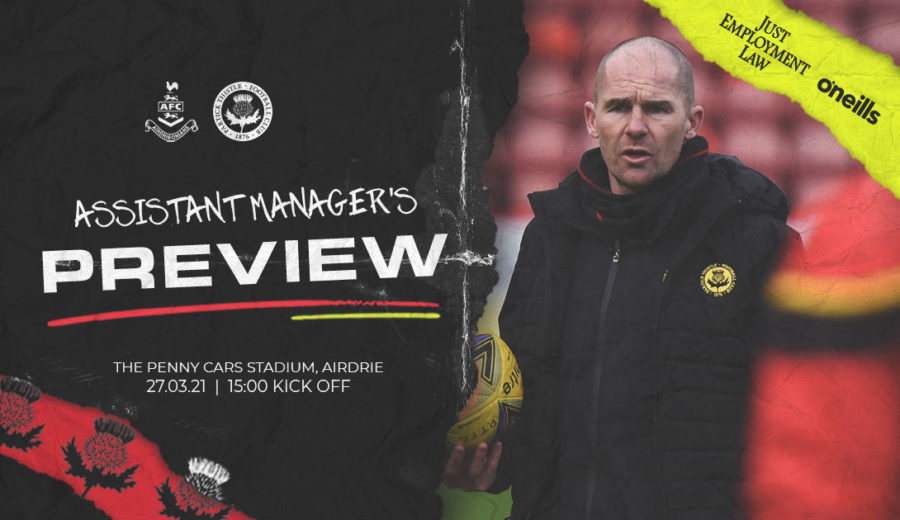 Partick Thistle play their first away game of the restart this weekend as they travel to face Airdrieonians in League One action. The Jags’ trip to the Penny Cars Stadium comes four days after their 3-0 win over Cowdenbeath in the Scottish Cup and a week after they returned to league competition with a 1-1 draw against Cove Rangers. The Diamonds sit one place above Thistle in the table with only goal difference separating the old rivals. Jags assistant manager Alan Archibald spoke to ptfc.co.uk to look ahead to the match, beginning by discussing our opponents:

“I’m expecting a really tough game because Airdrieonians are a really competitive team. They can play multiple ways in terms of being able to play nice football without also being scared to just get the ball into the box early. They’ve been one of the better teams in League One for quite a few seasons now so we know what we’re up against.”

Ian Murray’s side have only played once since the return of competitive football and were down to ten men after four minutes in that game which Archie says makes analysis more difficult.

“I’ve watched their game against Peterhead back and they lose Kyle Turner really early on so it’s difficult to take too much from that match. We were still able to look at certain things but the big bonus is we’re now playing teams for the second time this season so we’ve got a bit of familiarity in that sense.”

Ian McCall added Scott Tiffoney to the squad on Tuesday afternoon in time for the attacker to make his debut in the cup and Alan says the management team are very happy with the options they have at their disposal.

“You saw on Tuesday night how many options we’ve now got. We shuffled things about a bit and were missing a few guys that were cup-tied but we still won comfortably and really should have scored more if we’re being honest.

“Scott had been training with Livingston prior to arriving here so there was no issue with sharpness which is why the manager put him in from the start and you could see how much energy he brought to the team.

“He can play upfront or out wide and that just adds even more options for us. We’ve got guys like Connor Murray, Joe Cardle, Chris Erskine and Blair Lyons, who’ll be back soon, all of whom can make a difference and take some pressure off the strikers.”

One player who was still missing in midweek was Ross Docherty who is still on his way back from an injury sustained against Falkirk on Boxing Day but Archibald has some good news on that front.

“He was back in training yesterday and trained again today which is fantastic. Tomorrow might come just too soon for him, I don’t think the manager has decided one way or the other yet but if he’s not in the squad then he’ll still come to Airdrie with us and do a bit of work before the match because it’s important to keep his workload up as he builds up his fitness.”

Archibald then gave us a general update on squad fitness after the last training session of the week.

“It’s looking better for us on the injury front at the moment. It’s only really Tam O’Ware who’s out at the moment which is night and day compared to what we were experiencing towards the end of last year.”

More exclusive preview interviews with Ryan Williamson and Alan Archibald will be available for JagZone subscribers to watch today – log in to view.

JagZone subscribers will be able to tune in to live audio commentary for our fixture against Airdrieonians – click here to tune in.

The home side are offering a PPV option, priced at £12, for Jags fans who wish to watch a livestream of the game – click here for more info.

We’ll have extended highlights and a full game replay of our trip to face Airdrieonians on JagZone.