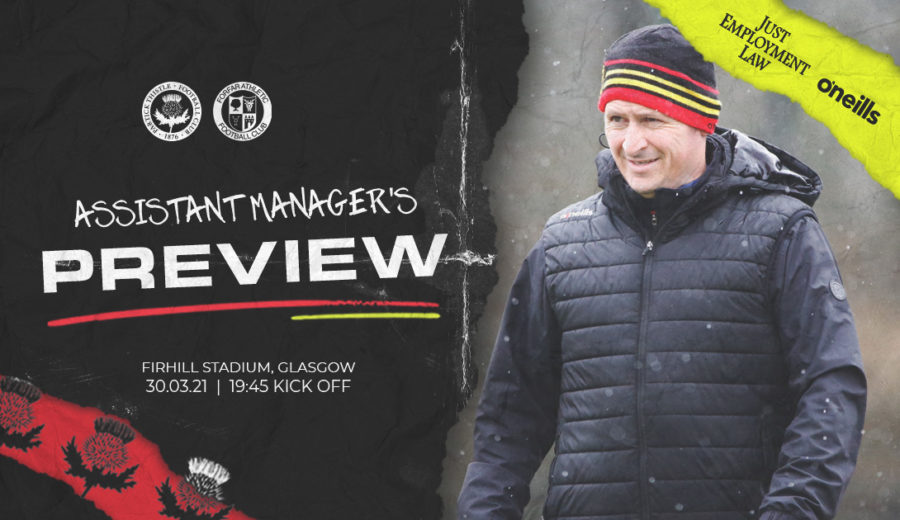 After a fantastic 4-2 win over Airdrieonians on Saturday, Partick Thistle now return to Firhill to take on Forfar Athletic in League One action. The Jags climbed to third place with victory over the Diamonds and will look to continue their winning form against the visiting Loons who have won once and lost once since the league’s return. Thistle assistant manager Neil Scally spoke to ptfc.co.uk ahead of the fixture:

“Everyone has been in really good spirits coming in for training. We’ve scored a handful of goals and played some really nice football at times which has given the players a lift and you can see they have a confidence about them now too.”

The Jags hadn’t scored three goals in a game all season before last week’s cup tie against Cowdenbeath but now the Maryhill men have done twice in a row and Neil says the management team are delighted to see chances being stuck away.

“I mean, if we’re being overly critical you could say we still should have scored more in both these games; against Cowdenbeath and Airdrieonians but you can’t complain too much when you get seven goals in two games particularly when you look at how we struggled to score earlier in the season.

“Also, it gives you a bit of cushion which means we were able to make a few changes and give certain players a bit of a rest which we think is going to be important with so many games to play.

“If we asked the same players to do 90 minutes twice a week for an extended spell then that would eventually catch up with them but because we’ve been three goals up in each of the last two games we’ve been able to lighten the workload slightly for some of the guys by using our squad of the bench.”

In the team’s three games since the restart, six different players have found the back of the net for Ian McCall’s side and Scally says that’s an encouraging sign.

“I think during the first part of the season we were over-reliant on certain players for creativity and goals which ended up costing us in certain matches. That allowed other team to focus on specific players knowing that if they could stop them playing then we’d struggle to score but now we’ve got more options and you’ve already seen it to an extent.

“Obviously, the strikers are your main threat and Zak Rudden and Brian Graham have both got goals and Ross MacIver wasn’t far away either. In behind and on the flanks we have Joe Cardle, Connor Murray, Scott Tiffoney and Chris Erskine who are all goal threats. Also, we know what Shea Gordon is capable of coming forward from the midfield so there’s a lot to think about for opposition teams and a plenty of options for us.”

Thistle were 2-0 winners when they faced Forfar at Station Park earlier this season in a difficult away fixture and Neil is expecting another tough contest at Firhill.

“Thinking back to that game, they made it very difficult for us and we really struggled to break them down in the first half. Since then they’ve added a few new faces to their squad so we’re under no illusions about this game; like every other game in this league, we’ll have to be at our best to get the three points.”

Scally ended by giving us an update on squad fitness going into the game against Forfar.

“It’s pretty much the same as it was ahead of the game on Saturday. After the Airdrieonians game there were a few wee knocks and bits of tightness but that’s always going to be the case and everyone who was hurting a bit on Saturday made it to training so no new worries at the moment.”

More exclusive preview interviews with Neil Scally and Brian Graham will be available for JagZone subscribers to watch today – log in to view.

JagZone subscribers will be able to tune in to live audio commentary for this weekend’s clash with Forfar Athletic – click here to tune in.