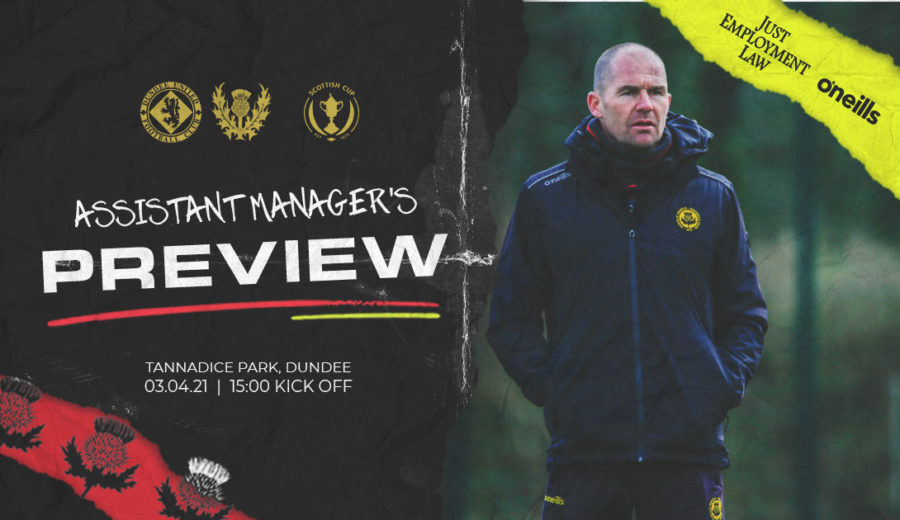 Partick Thistle return to Scottish Cup action as they take on Dundee United in the competition’s third round this weekend. The Jags travel to Tannadice having beaten Cowdenbeath in the last round of the cup while the Tangerines are only now starting their 2020/21 Scottish Cup journey. Thistle assistant manager Alan Archibald spoke to ptfc.co.uk ahead of the clash:

“It’s going to be a good challenge for us this weekend, going to a Premiership team, and it’s cup competition which always brings a bit of extra excitement. They haven’t played in a couple of weeks now while we’ve been playing twice a week so hopefully we can use that added match practice to our advantage.”

The two sides last met just over a year ago in Championship action with the game finishing 1-1 but with plenty of personnel changes on both sides including a managerial change for the home side, Archie expects a completely different encounter.

“Obviously, a lot has happened since that game. They’ve got a new manager in Micky Mellon who’s already been able to put his stamp on their team and their style of play so in that sense it’ll be different but we know a lot of the players who are still there and have done our homework on how they play too.”

The management staff have used the full squad available to them in the last couple of games and Archibald says that has been to keep everyone’s fitness levels at a peak.

“In the Airdrieonians game we made a few changes after things got comfortable meaning a few key players got a rest. Then against Forfar we had a few knocks which meant we rotated things a bit again. The Sports Science department have been working hard to keep everyone’s workloads around the perfect level and at the moment we’re achieving that.”

The Jags will be wearing a special centenary kit in the match to mark 100 years since our Scottish Cup triumph over Rangers in 1921 and Alan says the players like the look of the new strip.

“I remember us playing in the Firhill centenary kit against Dundee United in cup a while back and there was a dodgy goal that day so hopefully there’s nothing like that this time round but it’s a very nice kit and the players are liking it too. Of course, it’s a big year for the club and we’re looking forward to wearing the kit at the weekend.”

Archibald finished by giving us an update on injuries ahead of the trip to Dundee.

“Kieran Wright was nursing a bit of a thigh knock earlier this week but it’s mostly cleared up now. Brian Graham and Richard Foster had slight problems too that they’ve shaken off and Ross Docherty came through the game alright on Tuesday so that’s all positive.

“We’ve still got Steven Bell, Andy Geggan and Chris Erskine cup-tied although Chris picked up a nasty hamstring injury on Tuesday and has been for a scan so hopefully that comes back soon.”

More exclusive preview interviews with Mouhamed Niang and Alan Archibald will be available for JagZone subscribers to watch today – log in to view.

JagZone subscribers will be able to tune in to live audio commentary for our fixture against Dundee United – click here to tune in.

The home side are offering a PPV option, priced at £9.99, for Jags fans who wish to watch a livestream of the game – click here for more info.

We’ll have extended highlights and a full game replay of our trip to face Dundee United on JagZone.