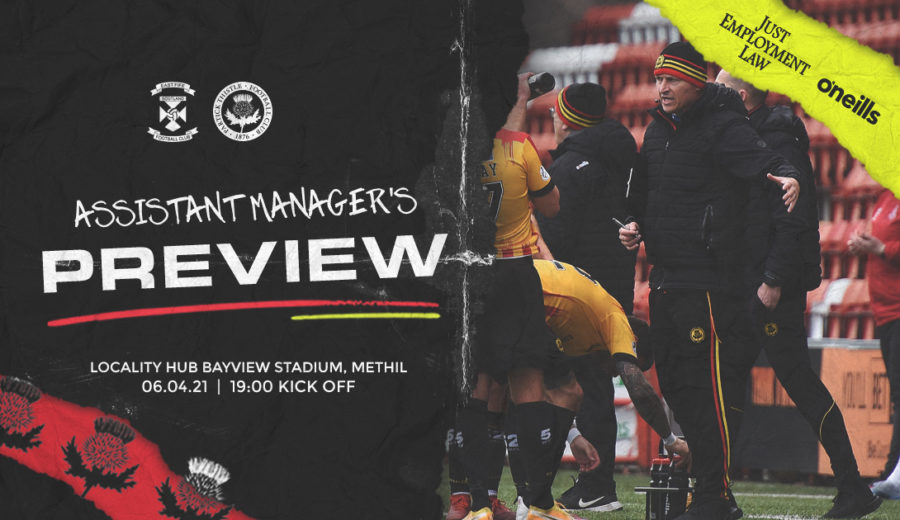 Partick Thistle return to league action with a midweek trip to face East Fife at Bayview. The Jags lost to a last-minute goal at Tanndice in the Scottish Cup on Saturday so now seek to get back on track with victory over Darren Young’s Fifers who were beaten in extra time by Morton at the weekend. Thistle assistant manager Neil Scally spoke to ptfc.co.uk ahead of the game:

“The mood has been good in training. It obviously hurt to lose in the way that we did on Saturday but I think all things considered we were pleased with the performance. We were up against a top flight side and we took the game to them so although we’re disappointed to have lost late on, there were plenty of positives to take.

“In that first half we were by far the better of the two teams and when you’re away from home playing a team from two divisions above and feel unhappy that you’re only 1-0 up at half-time it speaks to how good we were in that first 45 minutes but the games come thick and fast to we have to move on and get ready for a big game against East Fife.”

This week sees Thistle travel to take on East Fife before then making the long journey up to Peterhead on Saturday and Neil reckons this will be a pivotal week in the run-in.

“We’re at the point now where we’re running out of games to make the ground up and we need a couple of big performances and wins. At the moment, too many games are ending up as draws when we’ve had enough possession to be winning so we need to make sure we’re getting three points.

“It’s the business end of the season and the shortened nature of the league means the pressure really is on. We’d love to play good football and win like we did at Airdrieonians but it’s all about results now however you get them.”

Scott Tiffoney and Brian Graham came off injured against Dundee United at the weekend but Scally is hopeful that they’ll be fit to go again against East Fife.

“They’ve both had the rest of the weekend to rest and we’ve done a recovery session today so they’ve been given every chance to be fit and I’d expect them to be fine.

“These kinds of knocks happen all the time and sometimes when it gets towards the end of the season players have to play through knocks. It comes down to each player being honest with themselves about whether they can play through or whether it’s too much so it requires good communication between the players and management.”

More exclusive preview interviews with Neil Scally and Ross Docherty will be available for JagZone subscribers to watch today – log in to view.

JagZone subscribers will be able to tune in to live audio commentary for our fixture against East Fife – click here to tune in.

We’ll have extended highlights and a full game replay of our trip to face East Fife on JagZone.