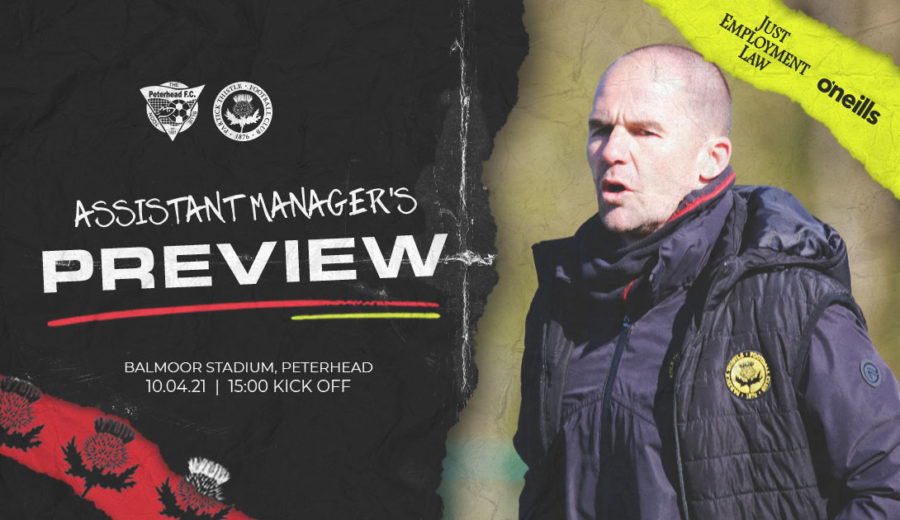 Partick Thistle make the long trip up to Peterhead this weekend as they look to get back to winning ways in League One. In the Jags’ last two league matches they’ve drawn 2-2 with Forfar at Firhill and East Fife at Bayview, missing opportunities to gain ground on the division’s pacemakers, Falkirk. They now take on the Blue Toon who came to Maryhill and took three points in December, the only team to do so in league action this term. Thistle assistant manager Alan Archibald spoke to ptfc.co.uk ahead of the clash:

“The games are coming very quickly at the moment and it will be another important one this weekend. We were disappointed with the result in midweek but hopefully we can take some confidence from the way we finished the game.

“We were really poor in the first half and were deservedly behind but it was a completely different story in the second half and towards the end we looked really dangerous. We need to try to carry the momentum we had towards the end on Tuesday into this game and make sure we’re right on our game from the start.”

Despite a positive end to the contest in Methil, Archibald says the team are plenty aware of the deficiencies shown in the opening 45 minutes and the need to do better at the beginning of games.

“It’s really strange because before the break we were defending very well but struggling to score but now it’s the complete opposite. It might have something to with the fact that we know we need to go for games and that’s leaving us a bit more open at the back but even with that there are moments where we don’t do ourselves any favours with silly errors.

“We want to control the game and really attack the opposition but if that’s going to expose us then we need to be more cautious. We’ve seen against Airdrieonians, Forfar and East Fife we’ve conceded early on and it makes things a whole lot more difficult for us later in the game when you give team that head start.”

Against East Fife the Jags made three half-time changes to look to swing things in their favour and Archie had specific praise for Steven Bell who helped steady the ship in defence.

“I think Stevie Bell made a big difference for us with his experience at the back. You could see how he used his know-how to ensure he didn’t get exposed and young Mouhamed Niang didn’t have his best game before he came off but he’s still learning and Stevie’s the sort of player who he could learn a lot from.”

Peterhead became the first team to come and take three points from Firhill in League One this season back in December thanks to a 1-0 victory and Alan says the boys are desperate to make sure that doesn’t happen again.

“They’re a good side, Peterhead, with players who’ve played at a higher level than League One. When we played them last time they got a goal that came from some poor play on our side but then they sat in and did a great job of really frustrating us and got a deserved win so we know we’ll have to play better than we did that day if we hope to get three points.”

Archibald ended by giving us an update on team news ahead of the fixture.

“We’ve got a few knocks here and there. Brian Graham had one from the Dundee United game and then got another heavy knock against East Fife but we’re hopeful that he’ll make it. We’re at the point of the season when you start to see more players playing through knocks and it’s just about managing everyone to make sure it doesn’t turn into anything more serious.”

More exclusive preview interviews with Richard Foster and Alan Archibald are available for JagZone subscribers to watch now – log in to view.

JagZone subscribers will be able to tune in to live audio commentary for our fixture against Peterhead – click here to tune in.

The home side are offering a PPV option, priced at £10, for Jags fans who wish to watch a livestream of the game – click here for more info.

We’ll have extended highlights and a full game replay of our trip to face Peterhead on JagZone.