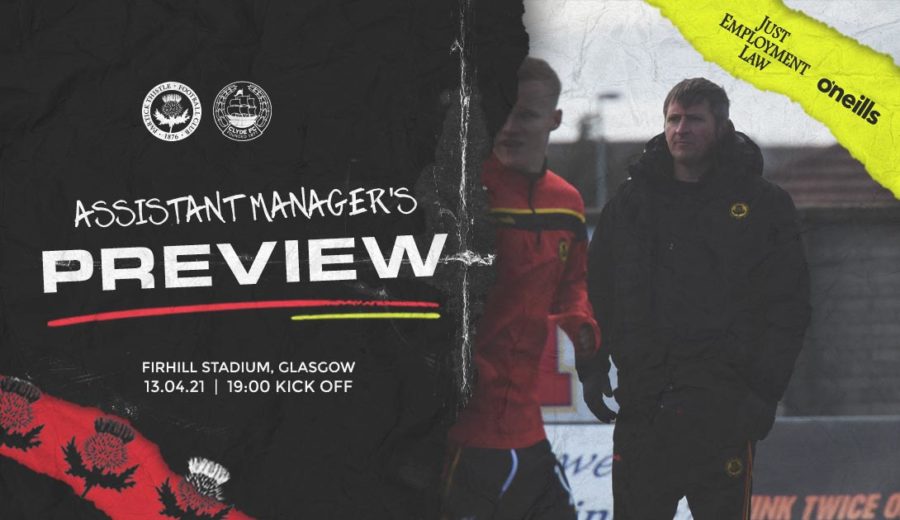 Partick Thistle are back at home to face Clyde this evening in League One action as they look to close the gap on the teams above. The game was originally scheduled to take place at the start of January but was snowed off meaning it had to be slotted in to the schedule as Thistle’s antepenultimate game of the pre-split fixtures. A 3-0 win over Peterhead on Saturday saw the Jags return to winning ways while Clyde suffered a 2-1 defeat away to division leaders Falkirk. Thistle assistant manager Neil Scally spoke to ptfc.co.uk ahead of the clash:

“The mood has been great in training after getting that win and the way we won has played a big part in that, I think. It was a game that we controlled and we took our chances in key moments which we’ve spoken about a few times. We had a comfortable end to the game and were able to rest a few players which was a privilege we’ve not had too often this year.”

Thistle are in the middle of a run of three games in six games and Scally is hoping the team can use the frequency of the games to their advantage.

“Most teams have had to contend with the Tuesday-Thursday games at some point and it’s our turn now so we just have to take it a game a time. The good thing for us is that we’ve got that win to start things off on Saturday and it means we can try to build some momentum.

“Every game’s going to be tough for us but we have to try to carry the performance from Saturday into the Clyde game and then hopefully we can get another three points and some more confidence to take into another really difficult game on Thursday.

“We want to get into that winning habit and put a run together as we head towards the split. These two games give us an opportunity to put pressure on the teams above us before they play next but it’s only an opportunity until we go out and perform so we’ve got our minds firmly on this game against Clyde.”

The Jags have netted 12 times in the league since the restart and Neil reckons a clinical edge has developed in the squad as of late.

“I think it’s just having that killer touch in front of goal that we lacked earlier in the season. I don’t think we’re really creating more chances now but we’re being more ruthless when the chances come. That being said I still feel like we can score more but you can see there’s definitely been an improvement on that front.

“We’ve got a few creative players who are in top form just now. Brian Graham’s been scoring consistently, Scott Tiffoney has given us something different, Connor Murray was the Player of the Month last month and Joe Cardle’s been brilliant since we came back so when you’ve got guys like them in good form you’re always going to cause problems for teams.”

While the attacking output has improved, the defensive solidity has suffered since the enforced break, however, Neil is hopeful that the weekend’s clean sheet is a sign that the backline could be set for a return to form.

“At the end of last year the defence was brilliant and I think there was a spell where we conceded one goal in about nine games but for whatever reason as we came back we were giving away a few too many easy goals.

“On Saturday we were much better and, apart from one chance in the opening stages, they hardly threatened to score. We want to find the balance between attack and defence and Saturday’s game was a perfect example of what we’re looking for.”

An Ally Love goal won Clyde all three points the last time Thistle faced the Bully Wee but Scally hopes the team can use memories of that day as motivation to get their own back against the Broadwood outfit.

“That was certainly a tough one to lose and it serves as an example that if you’re not on your game you can get caught out. We didn’t play anywhere near our best in that game so we are even more keen to put on a good display this time round.”

Neil ended by giving us the latest team news ahead of our midweek fixture.

“Tam O’Ware is getting closer and he’s doing work with the physio at the moment. He’s still maybe a week or so away from training with us and then even after that it would be a couple of weeks before he’s considered for a squad just because of how long he’s been out.

“Blair Lyons is also back as everyone would have seen on Saturday. He got about 20 minutes which was great to see. Obviously, Chris Erskine picked up that injury that’s ruled him out which was a real shame because he’d been very lively in training but Blair coming back in means we’re not left with a hole in the squad.”

More exclusive preview interviews with Neil Scally and Blair Lyons will be available for JagZone subscribers to watch today – log in to view.

JagZone subscribers will be able to tune in to live audio commentary for this midweek clash with Clyde – click here to tune in.