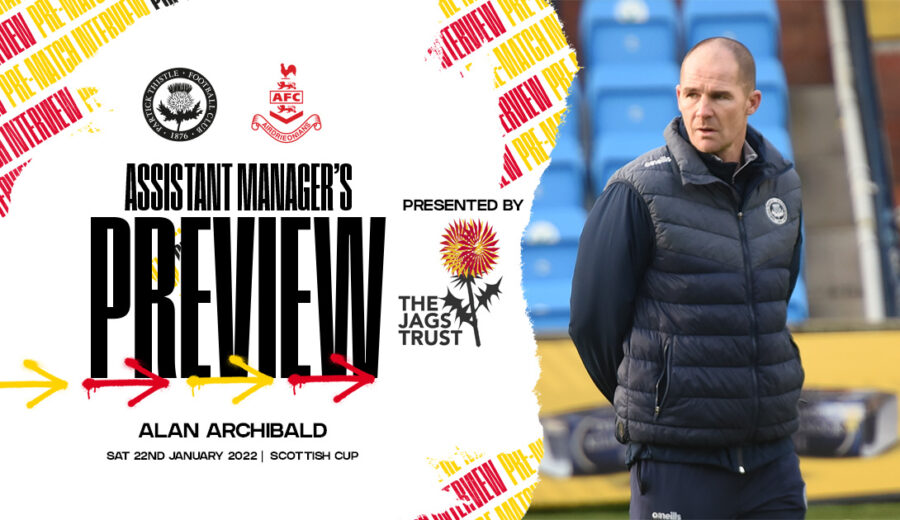 Following a 1-1 draw with Kilmarnock in their first home game of 2022, Partick Thistle will be looking to get their first Firhill victory of the new year this weekend as they take on Airdrieonians in the Scottish Cup. The Diamonds come into the tie off the back of five straight wins in League One but won’t have great recent memories of Firhill having lost twice at the home of the Jags last season. Thistle assistant manager Alan Archibald spoke to ptfc.co.uk ahead of the game:

“It’s a game we certainly feel ready for. Having played on the Friday night last week, we’ve had an extra day to recover and I was also able to go and watch Airdrie on the Saturday so we feel like we’re in a good place at the moment.

“I think after the spell without games it has taken the boys a couple of weeks just to get back up to speed properly but the training has really helped and obviously the gametime has helped as well. We’ve had two intense games in the league and some of the guys also got some time on the pitch in the Glasgow Cup as well so everyone’s raring to go.”

Archie then took some time to reflect on the game against Kilmarnock which he felt Thistle could have taken all three points from.

“I actually thought we were really good in that game and took the game to Killie. The groundstaff did a great job to get the pitch into decent shape and we were able to play some great stuff at times.

“The frustration was that we didn’t take a chance while we were on top, especially towards the end of the first half. We almost did with Cammy’s shot but the defender does brilliantly to clear it and then they get in front with the penalty which we felt was very harsh.

“Credit to the team though because they responded well and got back to the job at hand which was getting an equaliser and eventually we got it through a terrific finish from Ross Docherty which I thought was the least that we deserved.”

Looking ahead to a cup tie against Airdrieonians, Alan says the Diamonds won’t come to Firhill with any fear in their hearts considering their recent run of results.

“They’ve got no reason to come here with anything but confidence. Winning five games in a row shows they’re doing something right and I think in terms of style they’re quite different to what we faced in the league last year.

“When I went to watch them last weekend they were energetic, they knocked the ball about well and they played like a team who believe in themselves. Of course, you never know exactly how they’ll set up but I don’t expect them to come and sit in.”

The Jags had to played in front of a limited crowd of 500 home fans as they took on Kilmarnock last week but those restrictions have now been lifted meaning the entire Red and Yellow Army can return to Firhill this Saturday and Archibald says that will make all the difference for the players.

“You could feel it last week because we knew that the crowd could have been massive for a game like that. The 500 who did get in made plenty of noise and that did help but you can tell the difference. Having a full crowd back for an exciting cup tie will be great and hopefully as many people turn out as possible.”

Finally, Archie gave us the latest team news ahead of the game.

“The only change in terms of injuries would be Richard Foster. He’s struggling with a knock at the moment so although he’s still got a chance to make it, he’s a doubt.”

Exclusive video interviews with Brian Graham and Thistle assistant manager Alan Archibald will be available for JagZone subscribers to watch today – log in to view.

JagZone subscribers will be able to tune in to live audio commentary for our clash with Airdrieonians, starting at 2:30pm – click here to tune in.