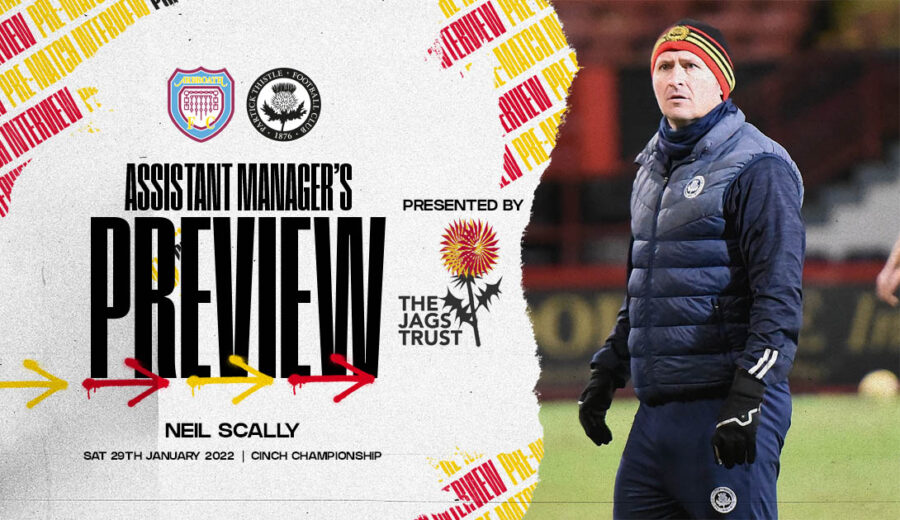 Gayfield Park hasn’t been a very happy hunting ground for Partick Thistle as of late with the Jags winless in their last four visits to Arbroath but Ian McCall’s side will be hoping to exorcise those demons as they head to Angus to take on the Red Lichties this weekend. Dick Campbell’s side sit top of the cinch Championship eight points clear of Thistle with two games more played. Jags assistant manager Neil Scally spoke to ptfc.co.uk ahead of the trip:

“It’s a game the squad are all looking forward to. They’re obviously a very good team and are especially tough to beat at Gayfield but it’s a game we believe we can go and win. With the way things are set up at the top of the table both teams know how much a result means so I expect it to be a lively match.”

The Jags know from previous experience that it can be windy in Angus but Scally says it’s up to the Thistle players to make sure that doesn’t affect the game.

“I think you know the conditions you are getting whenever you go up there – it tends to be windy but it’s forecast to be even worse than usual this week. We have to be able to adjust though and we’ll pick the team based on who we feel will be able to deal with those added challenges best and get us playing the football we want to play.”

Arbroath are the only team in the league who Thistle have taken no points from so far this term and Neil knows the team will need to be much better than the last time they took on the league leaders to get a result this time.

“We didn’t compete the way we needed to when we played them at Firhill. I didn’t think that was the case the last time at Gayfield when really it was individual errors that cost us but they deserved to win the second game.

“On that day they were winning 50/50s, beating us to headers and we need to do those little things better so we can control the game and create chances. In fairness to the boys that was the one defeat in our last 13 or 14 games so hopefully it was just an off-day and we can do much better this time round.”

Thistle welcomed an unrestricted crowd back to Firhill this past weekend and Scally says the team are looking forward to having the travelling support back for the game against Arbroath.

“It was great to have more fans back for the Airdrie game and I think it really did help the boys as they kept pushing towards the final whistle. Now, our away crowds have been just as important as the home ones this season and we definitely felt their absence at Hamilton earlier in the month.

“Going up to Arbroath, the fans are pretty close to the pitch and you can really hear them right throughout the game so it will be great to see and hear them back this weekend.”

To finish, Neil gave us the latest team news ahead of the league clash with the Red Lichties.

“At the moment, there aren’t any changes to talk about in terms of team news – we’re at full strength. I know some fans were wondering about whether Tunji would be available but his suspension will be for the next round of the cup rather than the next match in any competition so he can play.”

JagZone subscribers will be able to tune in to live audio commentary for our clash with Airdrieonians, starting at 2:30pm – click here to tune in.

Arbroath will be providing a pay-per-view option, priced at £13, for any supporter who wishes to watch a livestream of the match – click here for more info.