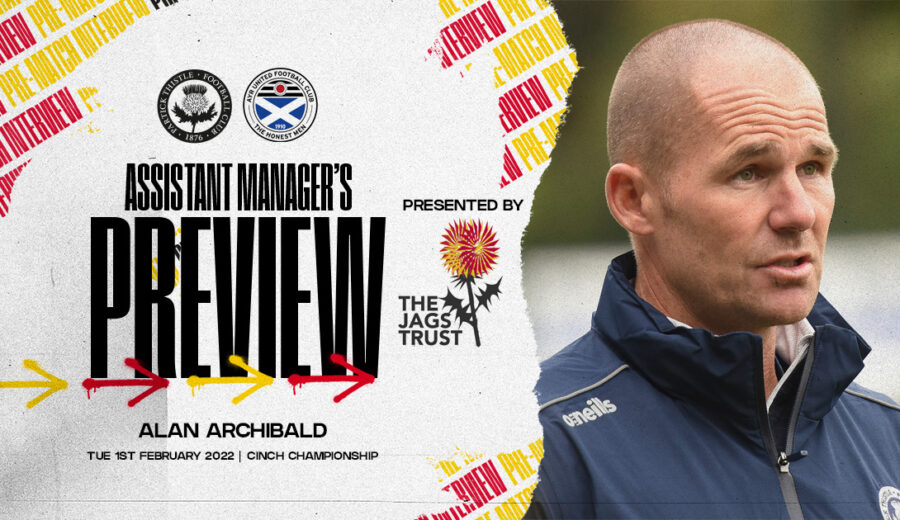 A hectic February begins for Partick Thistle tomorrow evening as they take on Ayr United at Firhill in cinch Championship action. It’s the first of seven games in 26 days for the Jags and it’s a tough start to that stretch against an Ayr side who have lost just once in their four league games under new manager Lee Bullen. They’ll be keen to avenge the two 4-0 defeat the Maryhill men have inflicted on them already this term. Jags assistant manager Alan Archibald spoke to ptfc.co.uk ahead of the contest:

“It was frustrating that the game was called off at the weekend because we were all prepared for a massive game but it was probably the correct decision at the end of the day. For us, it meant training on Sunday to keep the guys sharp for Tuesday night and it was a good session so we’re looking forward to the game.”

Ayr are one of a few teams in the bottom half of the table who have shown signs of improvement over the past couple of months and Archie says the team should expect a very tough game against the Somerset Park side.

“The new manager has changed quite a lot in a fairly short time. I think the way they approach the game will be different to the last time we played them and they’ve signed a few new players as well to bring something fresh to their squad.

“They’ve won games against Raith Rovers and Arbroath which shows you there’s been a improvement and also means that they’ll not be scared coming to play us.”

Thistle have still only lost once at Firhill since the end of September and Alan reckons the team are feeling confident when playing at home at the moment.

“We’ve found ways to get the ball down and play in recent games at home. We used the ball well against Raith, Killie and Airdrie so that’s encouraging for us.

“Especially now that we’ve got the fans back to give us that extra little bit during the game, we need to make sure we make full use of the home advantage when we have it.”

It’s been a busy deadline day for the Jags with Kyle McAllister and Alex Jakubiak arriving on loan from St. Mirren and Dundee respectively and Archie is looking forward to seeing what the pair have to offer in Thistle colours.

“I think they’re two great signings for us. Alex is a player who has been unlucky with injuries since he’s been at Dundee but he’s someone I’ve been aware of for a while. From our point of view, it’s about keeping him fit, getting him on the pitch and letting him show what he’s got.

“Kyle gives us something different off the right flank. We’ve had Tiffoney working magic on the left but on the right we’ve had to ask guys to fill in when it’s not their natural position so hopefully Kyle can maybe bring more balance in the wide areas.”

Archibald finished by giving us an update on team news ahead of the meeting with the Honest Men.

“At the moment, I don’t think we’ve got anything new to worry about. Richard Foster who missed the cup game against Airdrieonians has been back in training and should be available but that’s it as far as injury news is concerned.”

JagZone subscribers will be able to tune in to live audio commentary for our clash with Ayr, starting at 7:15pm – click here to tune in.