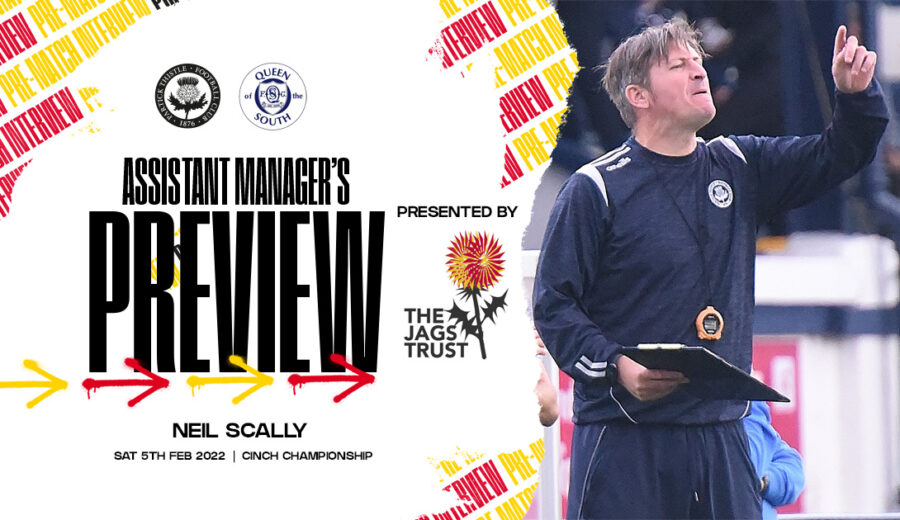 After starting February with a win over Ayr United in midweek Partick Thistle are now looking to continue their unbeaten start to 2022 as Queen of the South visit Firhill this weekend. The two sides battled out a goalless draw the last time they met back in December but with the Doonhamers looking to move off bottom spot and the Jags still harbouring hopes of challenging at the top, both teams will be keen to take all three points this time around. Thistle assistant manager Neil Scally spoke to ptfc.co.uk ahead of the game, starting by reflecting on the win over Ayr from earlier in the week:

“It was difficult on Tuesday night because Ayr have improved a lot since we beat them in November. In previous games against them we’d got the first goal and then they kind of fell apart but they actually responded pretty well to going behind on Tuesday.

“That being said, we had a couple of good chances late in the first half that we probably should have taken but we got there in the end and that’s all that matters at the moment.”

Now, preparing for a game against the Championship’s bottom club Queen of the South, Scally expects another tight contest.

“We’ve said it time and time again – there won’t be any easy games in the Championship and that only becomes truer as you get towards the end of the season. Queens know they need points on the board so they’ll come here ready to give everything to get those points but the same goes for us, we know we need to be winning games if we want to get to the top of the league.

“If I’m honest, I’m quite surprised they’ve ended up bottom of the league because we’ve found it difficult in all three games we’ve played against them. They’re energetic and take the game to you and they’ve got some really talented attacking players in their squad too.

“They came from behind twice on Tuesday night to get a draw against Raith which shows you the attitude they have. They won’t come here fearful or expecting to lose; they’ll see it as a big opportunity to pick up some points.”

Although Thistle won’t take Queens lightly, Neil said the Jags are feeling good at the moment and hopes they take that feeling into Saturday’s game.

“Every game is tough, as I’ve said, but we still believe in our own ability. When we’re at our best and dominating games we’re a match for anybody in the league so we want to make sure we hit those levels this weekend.

“It’s something we didn’t do last time we played them at Palmerston Park but we feel we have done it in our recent games. The goal on Tuesday is a great example of what we can do when we find that rhythm in possession so we’ll be looking for more of that on Saturday.”

The shutout against the Honest Men in midweek was the team’s 16th of the season in all competitions and Scally says that sort of solidity is going to be crucial during a busy month of February.

“We’ve got a lot of football to play in a short space of time and naturally there are going to be tight games in amongst that. The last two games we’ve had have required some grit late in the game and we’ve produced it in both instances so that’s great.

“The level of consistency this team have shown defensively over the past few months has been phenomenal and it’s a credit to the entire team because everyone plays a part.”

Finally, Neil gave us the latest team news ahead of the game against Queen of the South.

“There’s some good news and some bad news. The bad news is that Richard Foster will miss out because of that injury he picked up against Ayr so that’s a blow because he’s a big player for us. The good news is that Kyle McAllister, who wasn’t quite ready to play on Tuesday, should be in the squad for Saturday.”