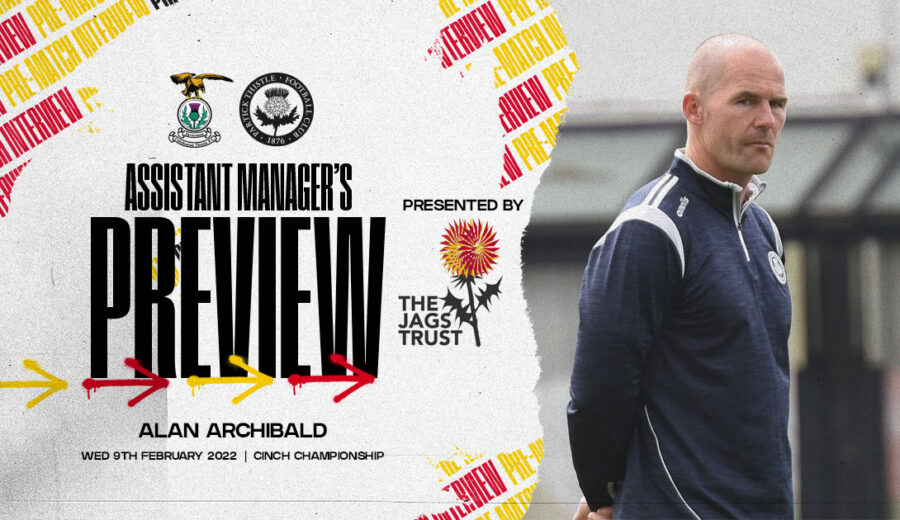 After getting their February off to a winning start against Ayr United last Tuesday, Partick Thistle will be looking to continue the positive start to the month as they travel to take on Inverness at the Caledonian Stadium this midweek. The Caley Jags are experiencing a sticky patch of form at the moment but have had the upper hand on the Maryhill Men so far this season with Ian McCall’s side only managing one point in two games against the Highlanders. Thistle assistant manager Alan Archibald spoke to ptfc.co.uk ahead of the teams’ third meeting this term:

“We’re very much looking forward to this one considering we didn’t get to play on Saturday. After beating Ayr we were keen to carry that into the Queen of the South game but it wasn’t to be. The positive is that at least we have another midweek game and we’ve not had to wait a week and a half between games.

“That positive feeling is still there from the Ayr game and everyone is just desperate to get stuck into the next game. You want to build some momentum so the game against Inverness gives us the chance to do that.”

With no game at the weekend, there was a chance for the other teams in the top five to pull away from the Jags but come Monday morning only one of the teams in the play-off places had won and Archie admits that was a relief.

“We knew ahead of the weekend that Arbroath and Killie were going to be playing each other and someone was dropping points there but then on Saturday Raith drew and Inverness lost so overall it was a decent set of results for us albeit we’d have loved to have had the chance to win ourselves and move up a couple of places. “

Now, preparing to take on Inverness at the Caledonian Stadium, Alan says he expects quite a different Caley team to the one we faced previously.

“I think just looking at the starting line-up they put out at the weekend, there are quite a few changes in there. They’ve signed some players, let some go and picked up some injuries so they’ll be a slightly different prospect in terms of personnel.

“We were our own worst enemy when we were last up there but I was very impressed with them when they came to Firhill. They created really well and were unlucky not to win in all honesty but we know we can play a lot better than we did that day so that’s what we hope to do this time round.”

A win against Billy Dodds’ side would see the Jags moving two places up into third and Archibald says that’s a massive incentive for the team.

“You don’t want to get too hung up on looking at the table with so much football left to play but it is something tangible that we can aim for. Especially when you consider we’d be above Inverness and Raith with games in hand on them, it would be great if we can go and do that.

“It’s never that simple though. For Inverness, they’ll see it as a chance to end a poor run of form with a statement result so we need to make sure we’re on our game when we head up there.”

Finally, Archie gave us the latest team news ahead of the trip North.

“I don’t think there are any updates on what Neil Scally spoke about towards the end of last week. Richard Foster will be out after the knock he picked up against Ayr but apart from him and Darren Brownlie, everyone should be fit to play a part.

“Kyle McAllister missed a couple of sessions last week with a slight knock but he came in towards the end of the week and has looked sharp so it’ll be good to have him available for the first time.”

Exclusive video interviews with Scott Tiffoney and Thistle assistant manager Alan Archibald will be available for JagZone subscribers to watch today – log in to view.

JagZone subscribers will be able to tune in to live audio commentary for our clash with Inverness CT, starting at 2:30pm – click here to tune in.