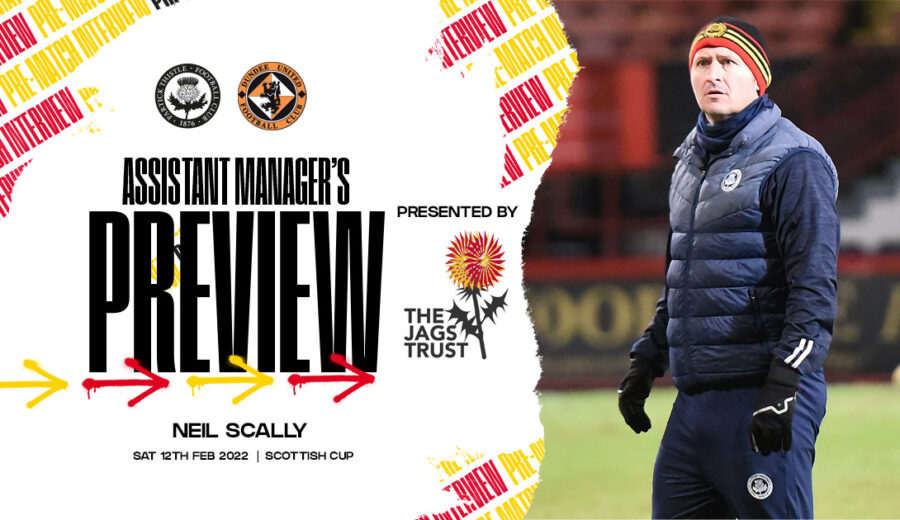 There’s a place in the Scottish Cup quarter-finals up for grabs this weekend as Partick Thistle host Dundee United in a fifth round tie. The two sides met in last year’s edition of Scotland’s oldest cup competition when the Tangerines ran out 2-1 winners thank to a late Nicky Clark goal at Tannadice. Now, Thistle are looking for revenge against the Premiership side as they visit Maryhill and Jags assistant manager Neil Scally spoke to ptfc.co.uk ahead of the match:

“It’s a big opportunity for us to get into the quarter-finals of the Scottish Cup which is a very exciting proposition. It’ll be a difficult game against a team in the top flight who have been doing well recently but we back ourselves to do well considering how we’ve been playing as of late.”

Thistle most recent game was a 3-3 draw against Inverness on Wednesday night and Scally admitted that one was a tough one to take for the team with the Caley Jags scoring an injury time equaliser.

“Having been ahead three times in that game, to then not go on and win it was disappointing. On top of that, we felt the goals we gave away were a bit slack in terms of the set pieces and marking in key moments but there were still plenty of bright spots.

“It’s difficult to look at those bright spots when you draw the game in such a devastating way but we shouldn’t get too down about it. It was always going to be a tough place to go and, if we’re being completely honest, Inverness probably created enough in that second half to warrant a draw.”

With cup action upcoming this weekend, Neil thinks the team need to use this game as a chance to get the frustration of midweek out of their system.

“It’s a break from the league action and another big fixture for us. The positive thing is that it is such a sharp turnaround from Wednesday so we’ve not had to dwell on it. The best way to get over disappointment is to go out and put it right on the pitch and getting into a Scottish Cup quarter-final would be some way to do that.”

Since beating Kilmarnock in the fourth round of the Scottish Cup, Dundee United have lost just once in five Premiership games and Scally knows it’ll be a tough test for the team against Tam Courts’ side.

“They were having a tough time at the end of last year but things have picked up recently. They’ve got a lot of energy in their side and they’ve got a decent bit of physicality too and they’ve been very solid defensively as of late so it will be no easy task to beat them.

“Despite that, I think we have to go into the game with belief. There’s no point going into this game with fear and just letting them dictate things. We played them in the cup last year as a League One side and controlled the game in large parts so we’re hopeful that if we have that same approach tomorrow we’ll be able to do similar.”

For the third round in a row Thistle are the home team in the Scottish Cup and Neil says the Jags have to use that to their advantage as they did against Airdrieonians and Dunfermline earlier in the tournament.

“The crowd were a massive help in the Airdrie game, especially late on when we were battling to get over the line and we’re hopeful of a similar effect tomorrow. I think we expect a good crowd overall with United taking a good support as well but we’ll be looking to the home crowd to make plenty of noise.”

Finally, Scally gave us the latest team news ahead of the Tangerines’ visit.

“We’re a couple of bodies down this week unfortunately. Tunji’s suspended and Kyle McAllister is cup-tied because he played for St. Mirren in the last round so those two will drop out of the squad. Richard Foster is still going to be missing for us as well.

“Away from news for tomorrow, Darren Brownlie has been making a bit of progress over the past couple of weeks. He’s been doing a bit of running and has actually been coming along to training to do a bit of jogging so it’s good for him to be back around the squad. He’s still a long way from a return to full training but we knew it was going to be a gradual process with him so to see him slowly going in the right direction is encouraging.”

JagZone subscribers will be able to tune in to live audio commentary for our clash with Dundee United, starting at 2:30pm – click here to tune in.