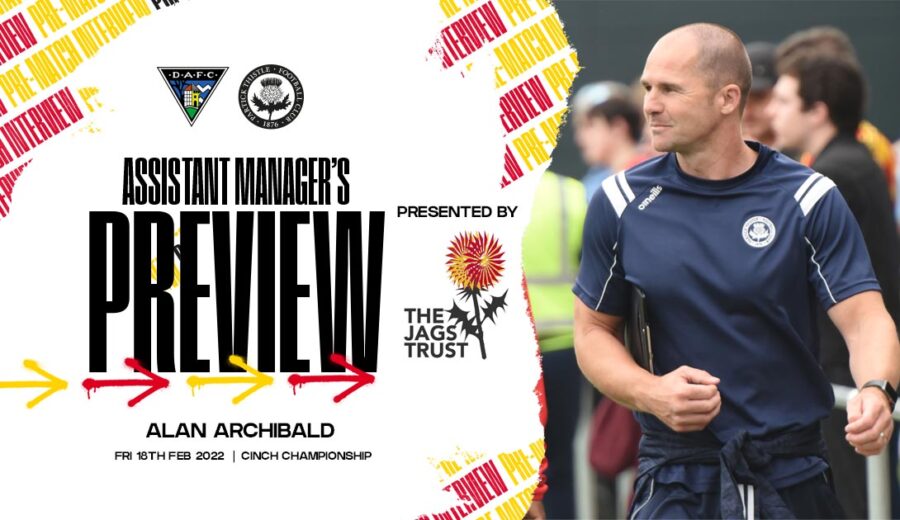 After their elimination from the Scottish Cup on Saturday at the hands of Dundee United, Partick Thistle return to league action with a Friday night trip to take on Dunfermline Athletic. The Jags were 3-0 winners at East End Park earlier this season but with the Pars having lost just once in their last five, Ian McCall’s side face an altogether different prospect this time in Fife. Thistle know that a win would see them jump two positions ahead of the Saturday afternoon fixtures and even a draw would take them into the play-off places at least temporarily. Jags assistant manager Alan Archibald spoke to ptfc.co.uk before the game:

“We’re looking forward to getting back to the league campaign with another important game. We’d have loved to go further in the cup now but it wasn’t to be and now we have to look ahead and for us that’s this Friday night game against Dunfermline at East End Park which I’m sure will be a tough one.”

Archie reflected further on the cup defeat to Dundee United, explaining why he felt the team deserved better from the tie.

“I thought we were the better team and I think nearly everyone who watched the game probably thought that was the case. Defensively, we were missing a couple of big players but we still limited them to very few shots and even fewer shots on target; it’s just unfortunate the one shot on target they did get was a fantastic half-volley from outside the box.

“We put their goal under plenty of pressure, particularly in the second half, and the guys can be proud of the way they played. They probably didn’t want to hear that on Saturday straight after the game but coming back in for training on Monday I think everyone realised we played well and should take the positives from it back into the league games.”

Now looking ahead to a clash with Dunfermline in Fife, Alan is expecting a different test to the ones we’ve experienced previously against the Pars.

“We’ve obviously done some analysis on their team and they’ve made a few changes to the team recently. Some of those are new signings and some of those are guys who maybe weren’t getting start earlier in the season.

“John Hughes has now had more time with the team and, as you’d expect, he’s been able to get the team closer to what he wants as the season’s gone on. I think he’s made them difficult to beat, they’ve had a couple of off-days here and there but for the most part they’ve been better defensively so it won’t be easy.

It isn’t just Dunfermline who Archibald thinks have become more solid at the back and he reckons there are going to be a lot of tight games between now and the end of the season.

“There’s so much on the line at this point in the season and everyone in the league is fighting for something so no one wants to give anything up easily. The teams in the bottom half have been improving and that’s shown in some of the results we’ve seen in recent weeks so we’ll need to make sure we take our best form into every single game.

“It’s up to us to make sure we’re working just as hard as these teams who are trying to survive. That’s the first thing you need to do in any game in the Championship and it only becomes more important towards the end of the season. Once we do that, we can then start thinking about showing our quality in terms of the attack.”

Alan finished by giving us the latest news ahead of our trip to take on Dunfermline.

“We welcome a couple of boys back which is great with Tunji coming back from suspension and Kyle McAllister back from being cup-tied at the weekend. Richard Foster still isn’t quite there yet but he’s been doing well and has managed a bit of training so hopefully next week we could see him back in the squad.”

Exclusive video interviews with Cammy Smith and Thistle assistant manager Alan Archibald will be available for JagZone subscribers to watch today – log in to view.

JagZone subscribers will be able to tune in to live audio commentary for our clash with Dunfermline Athletic, starting at 7:15pm – click here to tune in.

This fixture is being broadcast by BBC Scotland.