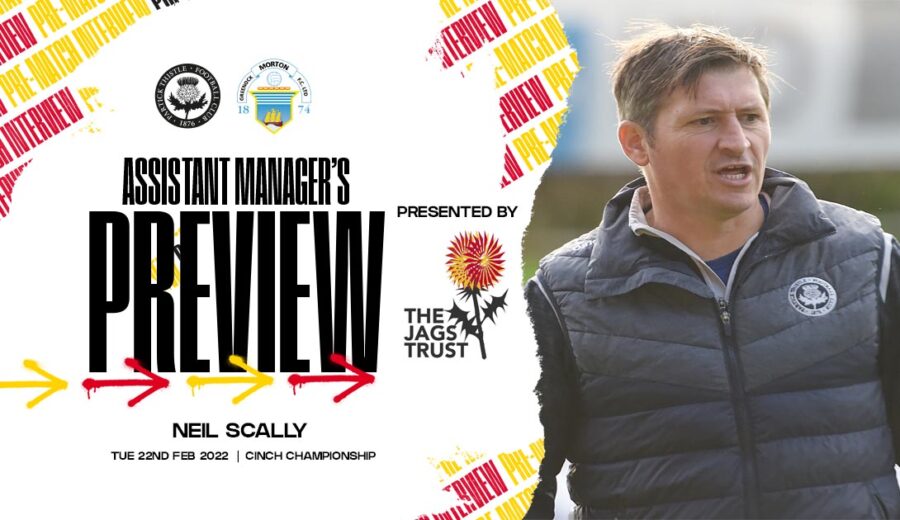 Two of the cinch Championship’s form teams go head-to-head this week as Partick Thistle host Greenock Morton for some Tuesday night football. Despite losing at the weekend, the Ton have picked up more points than any other side in the division over the last five games with 10 and Thistle are only one point behind them in that respect. Now the two teams clash for the first time since late October when they couldn’t be separated in a 0-0 draw at Cappielow. Thistle assistant manager Neil Scally spoke to ptfc.co.uk ahead of the game:

“We’re just really looking forward to playing after the call-off at Dunfermline last Friday. We feel like we’ve been in good form as of late but it’s been a bit stop-start with the postponements. We’ve had to shuffle about the training schedule again but the attitude of the squad has been superb and we’re looking forward to playing against Morton.”

The Jags are unbeaten in their last five league matches with two wins and three draws in those games and Neil says the management team are pleased with the levels of performance the team are showing.

“We feel like the boys are playing well at the moment. There have definitely been a couple of games where we’ve felt the performance deserved better than the result we ended up getting but a few key moments cost us.

“You look at the Inverness game when we were on top for large spells of the game but soft goals at the end of each half really cost us which was frustrating. Then, against Dundee United we felt we were comfortably the better team but we didn’t take our chances and they did which was ultimately the difference.

“Overall, I think there is a confidence in the team at the moment which is why we want to be playing games.”

Coming up against a Morton side under new management in the form of Dougie Imrie, Scally is expecting a firm test from the Championship’s eighth-placed side.

“They lost on Saturday but have still been in a very good run of form recently. Dougie’s obviously had a positive impact on that team and we expect them to come here looking to win right from the start. They’re strong and physical and they can go direct when they need to so that’s something we need to be able to stand up to.”

With no other games scheduled for this midweek Thistle know a win would see them jump into third place and Neil admits that’s a massive incentive for the team.

“You try not to focus on the table but you are aware of it and we’ve been sitting in fifth for what feels like a long time even though we’ve been picking up points when we’ve played so it would be great to move up into third.

“The games in hand are only worth something if you go out and perform so that’s what we’ve got to do over the next few weeks. It’s not going to be easy to win any games as we move towards the end of the season but, as I said earlier, we’re feeling confident and we’ll see what we can do.”

Although he’s optimistic about the team’s overall aims for this season, Scally reckons it’s vital that everyone takes things one game at a time.

“I think every game is going to be big and as soon as you take your eye off what’s in front of you to look further down the line, that’s when you’ll slip up. We’ve seen the bottom five teams improving massively over the last couple of months and that’s only going to make things more difficult to string results together so we can only look at each game and ensure we give our all.”

To conclude, Scally gave us the latest team news ahead of the visit of Morton.

“The only real update we have at the moment is on Richard Foster. Richard picked up that injury a few weeks ago and was facing a decent chunk of time out but he’s worked very hard and has been back in training. This game may just be a bit too soon for him but he’s not far away and that’s great news for us.”

Exclusive video interviews with Lewis Mayo and Thistle assistant manager Neil Scally will be available for JagZone subscribers to watch today – log in to view.

JagZone subscribers will be able to tune in to live audio commentary for our clash with Greenock Morton, starting at 7:15pm – click here to tune in.