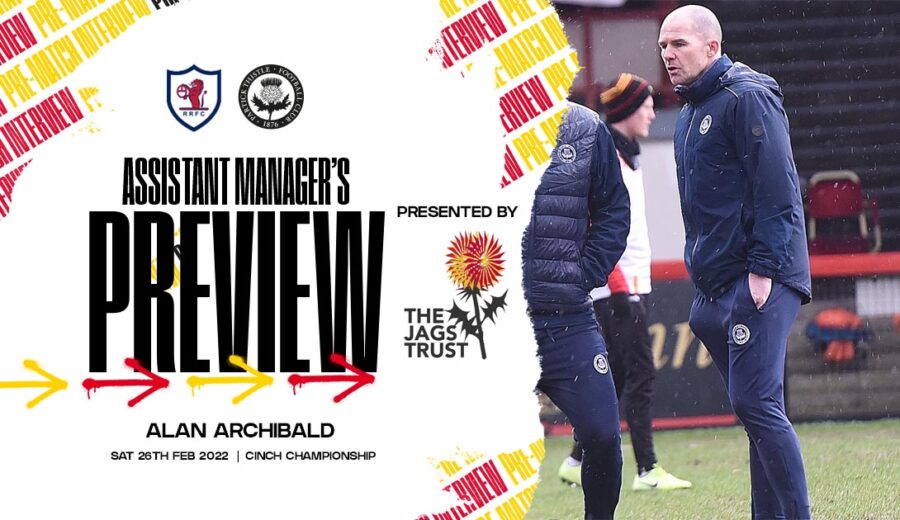 Partick Thistle find themselves in the unfamiliar scenario of trying to bounce back from a league defeat this weekend as they head to Kirkcaldy to take on Raith Rovers. The Jags suffered just their second Championship loss since September on Tuesday against Morton and now look to respond against the fourth-placed Rovers. It was John McGlynn’s side who were victorious the last time Thistle visited Stark’s Park when the Maryhill men left it too late to try to overturn a 3-0 deficit, losing 3-2 when all was said and done. Jags assistant manager Alan Archibald spoke to ptfc.co.uk ahead of the trip to Fife:

“We’re all keen to move on from Tuesday’s result as quickly as possible and to have a game four days later is ideal. We put a lot of effort into the game in midweek and felt we actually played relatively well for the majority of the game but it didn’t go our way and that’s hard to take.

“Now we just have to look to move on. We can’t get too bogged down by one defeat because there are games coming quickly at the moment and if we let our heads go down then it’ll be difficult to get them back up.”

Reflecting further on the 1-0 defeat to Morton, Archie says the key moments cost the Jags as they missed an opportunity to jump into third.

“It’s difficult to pick the bones of a game like that because there weren’t many things the boys did wrong. Obviously, we’d have liked to have been a bit more clinical in front of goal but sometimes it just doesn’t happen for you.

“At the other end, we defended well for most of the game. They’ve had two shots on target all game and come away with a 1-0 win so that’s frustrating especially when I think the goal was a preventable one too. It was just a simple high free-kick into the box which we didn’t deal with and then they get a bit of luck with the block.

“I think we’ve moved on as a group though. We spoke about with the players and I don’t think they’re letting it get them too down. Everyone is now focused on going to Stark’s Park for another opportunity to move up the table.”

The Maryhill men now head to Kirkcaldy to take on a Raith Rovers side who are struggling for form at the moment though Archibald says the team aren’t underestimating the Fifers.

“We’ve come up against them twice already this season and we’ve seen the kind of football they try to play. John’s teams tend to keep the ball down and I don’t think we’ll see anything different this weekend in that regard. On the other hand, they have made some changes in terms of personnel so that’s something we have to look out for.

“They’ve not been winning games recently in the way they were earlier in the season so they’ll be desperate to get back to winning ways. They’ve still got plenty of dangerous players so we’ll have to be prepared for a difficult game.”

Alan ended by giving us the latest team news ahead of the game at Stark’s Park.

“Everyone came through Tuesday’s game. Scott Tiffoney missed that match with a slight knock and then Kevin Holt picked up a wee niggle during the game on Tuesday but we’ll give them both every chance to be involved tomorrow.”

Exclusive video interviews with Ciaran McKenna and Thistle assistant manager Alan Archibald will be available for JagZone subscribers to watch today – log in to view.

Raith Rovers will be providing a pay-per-view option, priced at £14, for any supporter who wishes to watch a livestream of the match – click here for more info.