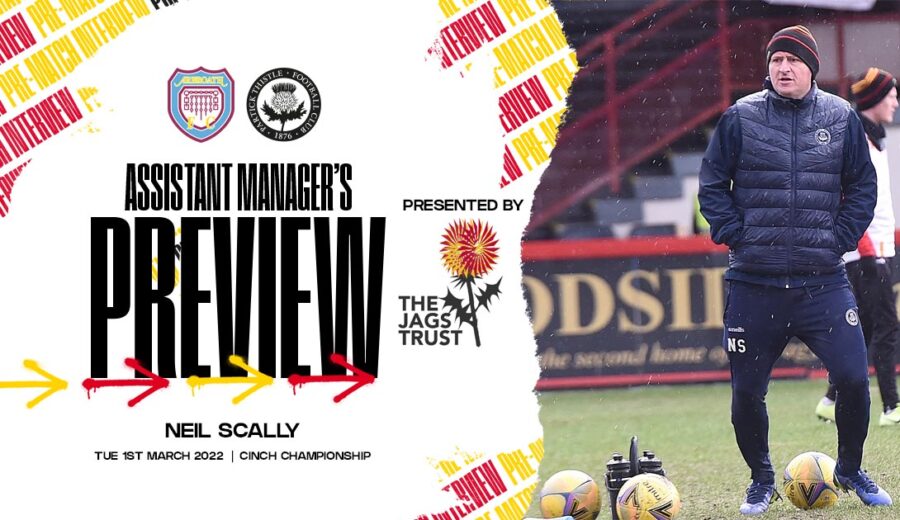 A chock-full March begins for Partick Thistle with a Tuesday night trip to take on league leaders Arbroath at Gayfield Park. The Jags head to Angus off the back of a 0-0 draw with Raith Rovers at Stark’s Park with Arbroath also having drawn 0-0 in their most recent game, against Greenock Morton. Dick Campbell’s Red Lichties have taken all three points in both of the previous two meetings between the sides this season so Thistle will be keen to get one back and boost their title aspirations. Thistle assistant manager Neil Scally spoke to ptfc.co.uk ahead of the contest:

“It’s another big game for us as they all are at this stage of the season. With this one being against the team at the top of the table that makes it even bigger. We want to be pushing towards where they are and getting a result against them would obviously be a massive help in trying to do that.”

Reflecting on Saturday’s draw in Kirkcaldy, Neil admitted that it wasn’t the Jags best performance and that a draw was the fairest result.

“We didn’t start well, to be honest, and they would have been disappointed not to be ahead going into half-time. We made some changes at the break and then we felt that we were much better in the second half, much more in the game and that led to some more openings.

“After half-time we did a better job of holding onto the ball and dealt with their long balls a bit better. Even with that though it was probably a better point for us than it was for them.”

Now looking towards the game against Arbroath, Scally says that having played the Smokies twice already this season the team know what to expect as they travel to Gayfield.

“They’re a very good side and they’ve shown that over the course of the season so far. You don’t get to March at the top of the table through luck so we know the quality of the team we’re up against.

“We haven’t shown our best against them in the two times we’ve played them so we want to make sure we’re on our game going up there this time. They’ll not make it easy for us though, they’ve got a really good mix of physicality and talent which makes them a really difficult team to beat especially at home.”

As well as a chance to get three more points on the board, the game also represents an opportunity to get one over on one of the Jags’ top five rivals and Scally says that would be a boost for the team.

“Going away from home to one of the toughest grounds in the league and getting a victory would be a huge boost for everyone of course. We know it’s going to be one of the most difficult games of the season but if we can get a win then that would set us up brilliantly for the other six games we have in March.

“We don’t want to get too far ahead of ourselves though. We’re taking it one game at a time and this one is a tricky one. We believe in ourselves though and will be going to Gayfield looking to take all three points.”

To finish, Neil gave us the latest team news ahead of our trip to Angus.

“There aren’t any changes to report at the moment. Kevin Holt and Scott Tiffoney obviously both missed the Raith game and both of them could make it for this game. They’re two important players for us so of course we want them available but we can’t afford to rush them back either.”

Exclusive video interviews with Jamie Sneddon and Thistle assistant manager Neil Scally will be available for JagZone subscribers to watch today – log in to view.

JagZone subscribers will be able to tune in to live audio commentary for our clash with Arbroath, starting at 7pm – click here to tune in.

Arbroath will be providing a pay-per-view option, priced at £13, for any supporter who wishes to watch a livestream of the match – click here for more info.